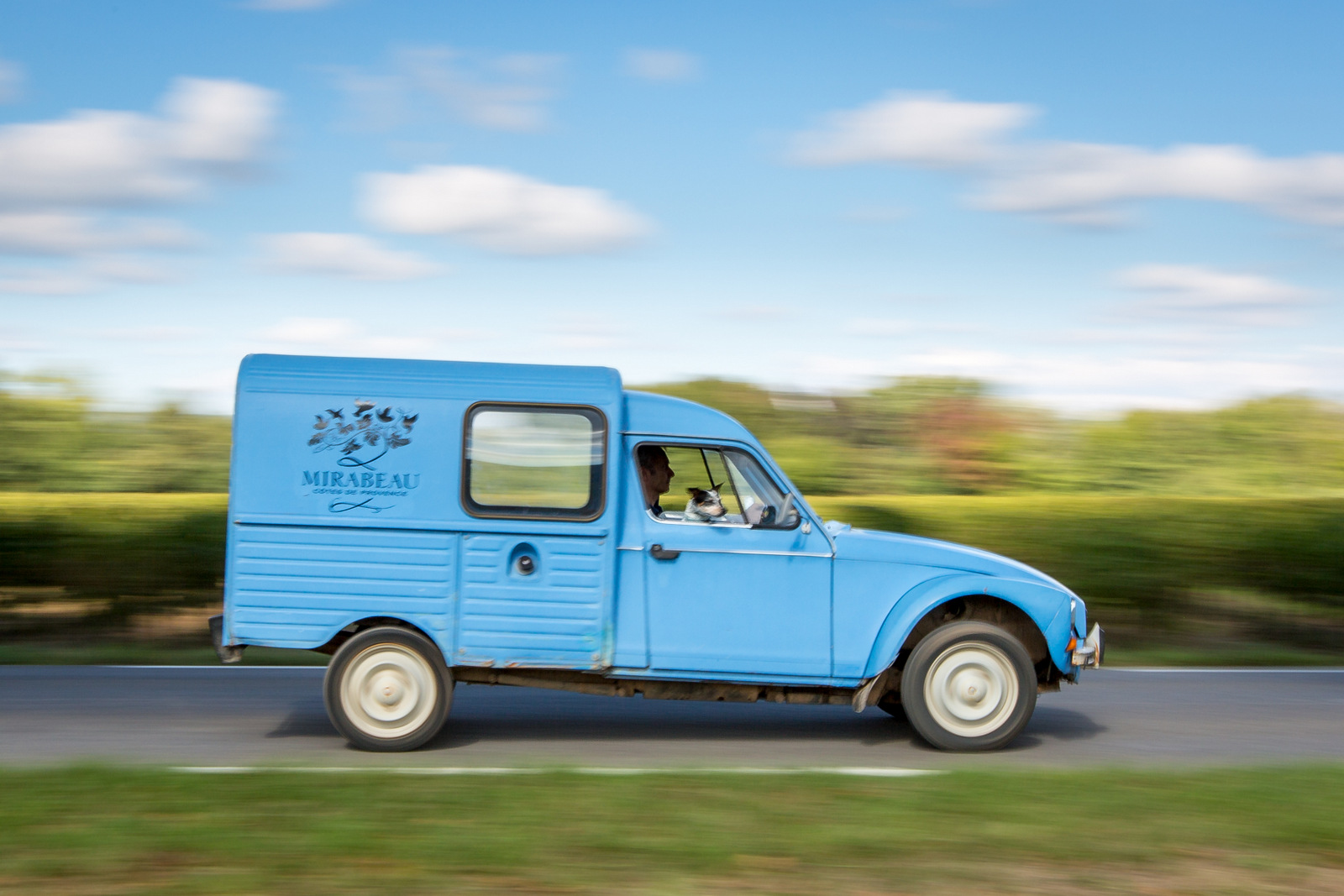 There is a particular enjoyment to be had in a vehicle where every change in engine-note, every rattle and every pebble and bump on the road is a tactile experience. Along with a nagging doubt whether you will reach your destination! Every shimmy of the suspension or grinding of gears is aurally evaluated with a subconscious crossing of fingers and each completed journey is celebrated to the consternation of bystanders… What does this have to do with wine, I hear you ask? Well, in order to deliver the wine you need a suitable vehicle, right?

Our subject is a 1979 Citroën Acadiane in original blue. It is the company mascot and the epitome of a french delivery-van from the ’70s with a history dating back to the 2CV. This particular car has been ever more sparingly deployed onto the road and always with extreme hesitation for delivery duties. The reason? Reliability. Unwillingness to idle, a refusal to start when hot and a noticeable lack of power (relatively speaking). The keys on the key rack became ever-more dusty as time pressure and dependability supersede the allure of a French classic on French roads… Eventually, the car became part of the decor in the boardroom (watch video here).

But as a symbol of the Mirabeau embrace of Provence, it deserved to be let out onto the road! Would we be able to trust the car again?

A few weeks ago, as providence would have it (some call it luck) we had a visit from some friends who are absolute Citroën fans. That they owned an identical car as a daily-driver and were thus armed with a depth of mechanical knowledge. Impressive enough but even more so was their willingness to ‘have a go’ at rejuvenating the old girl. A brief description of symptoms made it fairly obvious (to them, of course) that a few parts were worn-out and needed replacement. In another fortuitous twist, we were informed of the Mehari Club – specialists in all things 2CV and derivatives thereof. This ‘Citroën Mecca’ was situated only an hour away and became the obvious destination for a mission to collect some parts.

Thus we proceeded to dismantle the front of the car to get at a fiddly little part embedded behind the cooling fan. The whole nose and front bumper had to come off to get there and I wondered how small the hands were of the person building it at the factory as I dropped yet another bolt into the blackness of the engine bay. Yet while I was busy (helping and receiving instruction from René) my appreciation for the philosophy behind the design grew. It seemed to be the Land Rover of France except that everything was downsized to the minimum you could get away with. Tiny eleven- and eight-millimetre (head) bolts would never be allowed onto the Defender production line, yet it is testament to the design and engineering that the car is still running (albeit somewhat hesitantly) 35 years later.

We installed a number of new service items and adjusted the valves (which were far too tight). Setting the timing was another piece of fine-tuning crucial to performance. A new coil sitting proudly on top of where you would normally find the radiator in a normal car was the ‘piéce de resistance’ (excuse my French). As René sat in the sagging driver’s seat I expected long seconds of cranking and pumping the throttle. With a grin and a wink, he flicked the ignition and Belle sprang to life in a second! My slack-jawed wonderment became a wide grin as he revved the old girl in celebration. It sounded glorious and with a satisfied and knowing shrug, he motioned for me to start clearing away the tools as she idled.

But she fought back.

She wasn’t done yet! And the eager thrumming died out slowly into a spluttering silence as I was putting the last spanner away.

We turned in horrified unison, after all, everything we had done was spot-on, so why did this happen? First we tried the obvious and filled the petrol tank, but no joy came of that. Then we diagnosed a leaking carburator which was worn-out and dripping petrol constantly – not exactly according to spec. Another trip to the Mehari mecca ensued and the new carb was installed in shiny contrast to the oily dust on the rest of the engine. Still no joy! It is rather frustrating when all your efforts are strictly according to the guidebook and yet the old girl stubbornly refused to start. After double-checking everything there remained one last possibility – the condenser. Which meant stripping the front of the car once again. Would you believe the new part had failed? René later also diagnosed a tired and faulty voltage regulator which must have had something to do with it.

What should have been a few hours’ work became an arduous and frustrating objective lasting the better part of a week. But we got there in the end and the engine has been brought back to life. We christened the car ‘Belle’ (which is the dutch for Beauty and the Beast – we had tamed the beast and the beauty has returned). A pair of new seat springs and covers as well a rubber floormat added to the relative comfort onboard.

Click HERE for a video of the first engine test:

And HERE for a (short) subsequent test drive: