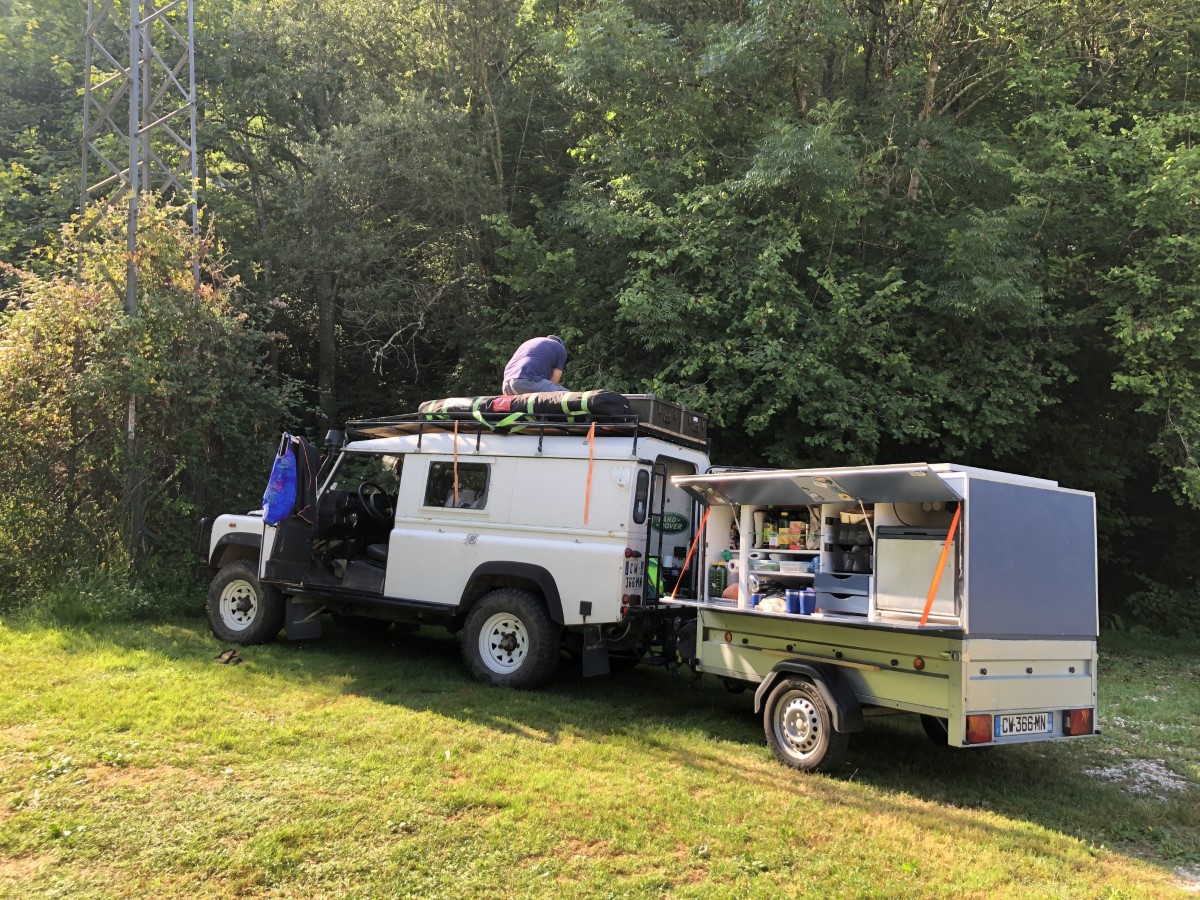 We have traversed France from the south to the north, twice. The second time was unplanned – but necessary for our new business. With itchy feet and heightened determination, we depart from our three-day stay in Dax and follow the smaller roads towards Biarritz and Bayonne. Bayonne is where I lost the bet to Vic on wondering if it was the birthplace of the bayonet. It is! Intermittent drizzle does not dampen the mood (pun intended).

The A8 into northern Spain is how you should build a highway. It follows the coastline closely, offering dramatic views of the Bay of Biscay. The going is a bit rough for the old Landy as there are quite a few steep sections where we swap positions with the heavy trucks. But the views are fantastic.

Not far beyond Santander, we veer off into the interior towards looming mountains that remind me of Polynesia. Not that I have been there, yet, but it is what I imagine it would look like.

A small, winding road heads off towards the horizon. Dense greenery lines the sides. Thick forests as far as you can see and only a handful of little villages. The further you go inland the wilder it gets.

We have been to this region before, about ten years ago, but from the other side of the massive mountains. We stayed in Riano which had a picture-postcard view over the lake from our tent.

No luck with any views this time though, but we arrive at Camping Picos D’Europa by a narrow road descending down into the valley. The campsite is nestled alongside a river, more of a stream than anything else.

First impressions are of a very civilised environment with wooden chalets and a square-away reception building. However, after a quick guided tour by a man on a bicycle, it looks to offer far more, and we soon pitch camp next to the stream in a fairly secluded area.

It’s a great spot and we wonder why nobody has claimed it… Must be the large electricity pylon in the middle! However, it is being rather successfully attacked by a large green vine which helps it blend into the backdrop.

In amongst the dense foliage across the bridge, and leading up into the forest, are more pitches that are very secluded on multi-levels. A nice idea for next time. There is a large pool in the main ablution block which looks very industrial and efficient indeed.

We spent a couple of days here in the grey, misty surroundings. It was nice to have the trickling sounds of the stream as a backdrop to everything we did. It gets a definite thumbs up as a base camp for exploring the area.