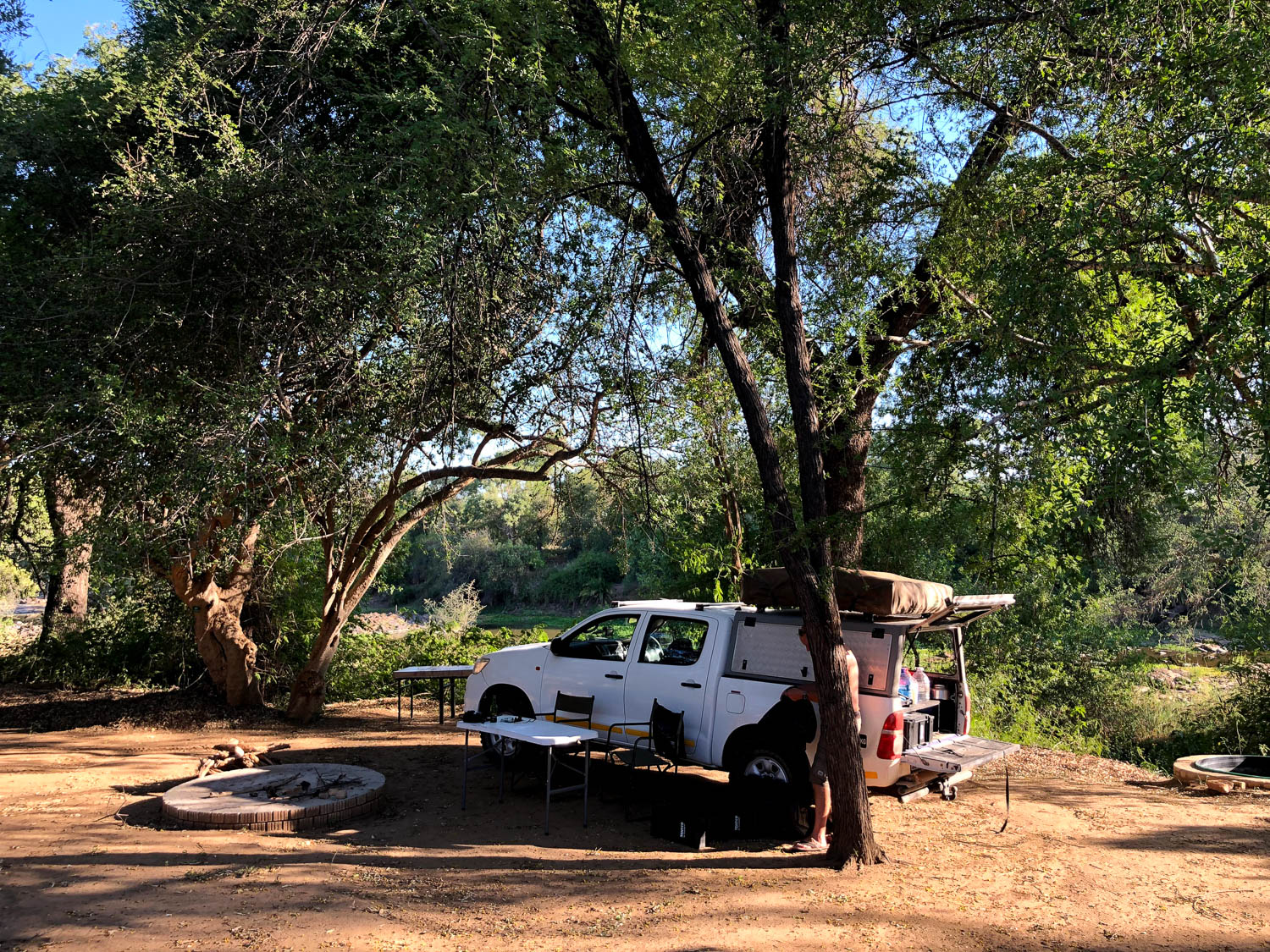 As we bid the Elephants goodbye at Elephant Sands Bush Lodge and Campsite we are still getting our heads around what exactly we have experienced. Being in such close, and open, proximity to these large, wild animals has been humbling on many levels. And although this is accessible by anyone, we still feel enormously privileged.

Today will be our last day on the road in Botswana. Our destination is African Ranches campsite, which is on the border of South Africa. The distance from Elephant Sands, at Nata, is about 550 km, which should take us around seven hours.

I chose this camp because I didn’t fancy driving through to Johannesburg in one go. Which is achievable at roughly 1000 km – but not exactly in the spirit of a relaxing, African vibe while you’re on holiday. And besides, one more night in Botswana sounds tempting!

As mentioned in another blog, the roads are well surfaced and the country is very, very flat. Along with a scarcity of traffic, this makes for good, if sedate, progress. Along – and sometimes standing in – the road, there are cattle, goats, donkeys and elephants… Yes, elephants. Roaming wild – outside the national parks, like Chobe. Very interesting to behold for us Europeans…

Even as the road becomes a wide highway near Francistown there are cattle idly standing in the middle separator bemusedly watching the traffic speeding by. Francistown is the second biggest town in Botswana with a population of 100 000 people. It is a bustling hive of activity, with many traffic lights and our first brush with the energy of a city. Progress is slow as traffic builds and we are subject to traffic jams, hawkers selling all kinds of products at the side of the road and people trying to get on with their day. Not everyone is on holiday you know!

Once through the busy town, the traffic thins out and we are reminded again that there are only 2 million people in the country. That is less than greater Johannesburg alone! So the main, paved roads, besides connecting the major towns, mainly serve a large amount of transport between the neighbouring countries. We mostly see trucks running up and down the roads. And a stray donkey cart…

Yes. After a whole week of careful, slow and deliberate driving, a policeman jumps into the road. Literally in the middle of nowhere! There are regular sections that are speed limited, down to eighty km/h. Due to a lapse in concentration, I was doing 86… He shows me the camera that takes video while recording the speed of each vehicle. This is proof that I was in fact breaking the law. I don’t deny it and accept the ticket. It is for BWP 300 – to be paid in cash only.

I confer with Vic and we empty our pockets. We have only BWP 200 in cash, as we are leaving Botswana the next morning. I explain it to the officer and he shrugs and accepts the money and motions to his colleague to adjust the speeding tickt to read 85 km/h. At once very official and also blasé at the same time. I leave with mixed feelings.

Near the Limpopo river, and with twenty kilometres to the border post, the route branches off onto a dirt road. Unlike the sandy tracks of Moremi Game Reserve and Chobe, this is a wide, compacted road, levelled by a grader. A cloud of reddish dust is thrown up behind us as we shudder over the washboard surface. A typical track serving farm lands. The air of mystery, that the African bush has, seems to have been removed. Just a little.

One man and his bicycle

After about twenty kilometres we reach the gate, and entrance, to African Ranches. There is a very simple little building where we are asked to sign in. All quite primitive, but effective, in true ‘African’ style. The building also seems to double as his living quarters with a desk, a thin mattress on a bed and little else besides the rather large check-in book. Another man appears with a bicycle and we follow him as he sets off into the bush along a dirt track.

The road winds its way for a couple of kilometres. We pass crop fileds of ‘mealies’, and a herd of – fenced off – cattle. More fences line the route and we start to feel slightly claustrophic after the freedom we had enjoyed in the north of the country. Can you imagine how the animals feel?

The whole campsite is not much more than the size of our single pitch in Savute Camp in Chobe. I think that there is room for about five or six vehicles here, but we share the space with just one other 4×4 (same as ours, doing the same thing). The ablution block is the smallest I have ever seen. Although it has been built well from ‘face-brick’ it has just one door on each side which gives access to a shower and toilet each for male and female.

The caretaker comes to collect our money and we spend some amount of time trying to explain that it has already been booked and paid for. After some confusion, we smooth things out. Some firewood is provided.

We grab a beer and light the fire while looking out over the Limpopo. Which is just a dozen yards away down an embankment. Big, trees hang over the banks and bamboo and bullrushes grow out in the river. It is fairly dry right now – normally there are hippos about. We contemplate the ‘border’ with South Africa, just fifty metres away. The river suffices – there are no fences separating the two countries. Twilight sets in and we turn our minds to prepare our meal. Crickets chirp in the blackness…

The next morning – having spent an agreeable (final) night in our roof tent – we head for Groblersbrug border post, which is about thirty kilometres away. We ponder the evening – a strange mix of the African bush and a rural farm is the best I can make of it. The Limpopo river reminds us that there are still wild animals about, but the surrounding crop fields suggest that man is in charge of these parts…

It always seems so final when you head back to civilisation. An abrupt ending that you were trying to avoid, trying to prolong the experience. At Groblersbrug the paperwork is despatched with rather quickly, the only hold-up being a search of all the trucks and vehicles – one-by-one – including ours, but within an hour we are back on South African soil.

We pause at the roadside and try to gather our thoughts, but it is too much. We have had too many experiences and the memories are still jumbled! From Makgadigadi to Maun. Moremi to Chobe. Kasane to Elephant Sands.

Luckily we have the photos and video! I can absolutely recommend visiting this amazing country. It really does have it all: safari, wildlife, bush camping, remoteness and that ‘energy’ you can’t quite put your finger on…

We have not had enough time to do it proper justice – and will have to return, oh how difficult that will be! But we have a very good idea of what Botswana is about and as an introduction to Africa – self-drive – this is hard to beat. Check out this blog post for general info and tips