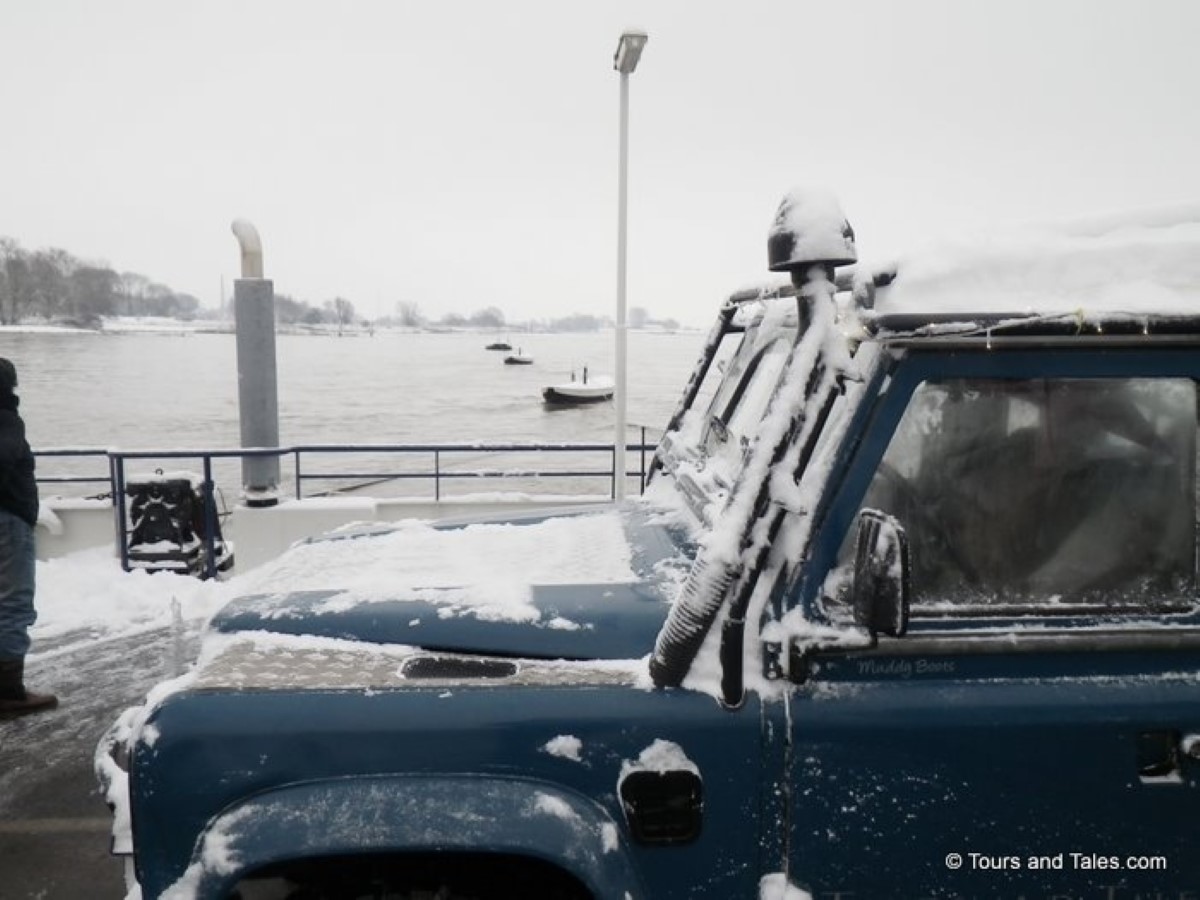 What kind of sadomasochist goes camping in -11 deg Celcius?! In a tent? And want their nearest and dearest to join them? Nutters, I tell you. The lot of us!

Signing in at Beekse Bergen, we’re allotted our “country” and sent off to find our team. Norway, Sweden, Great Britain, Croatia, … oh there it is – the Netherlands. Introductions to neighbours are made and we start unpacking. The stark contrast of our black groundsheet hits home against the white snow. We ARE doing this.

We look around and see canvas teepees with chimneys, and roof-tents with heaters! And promptly set up our little polyester summer tent. The ground is rock-hard. The heavy-duty rock pegs we got for our trip to Portugal, fortunately, do the trick. Further up, we see a guy drilling holes in the ground – for his tent pegs! Next, we layer our nest with a thin air mattress, a sleeping bag, a blanket, two thicker sleeping bags zipped together, another wool blanket and another sleeping bag on top. Surely, that should be okay?

We’re called to the club tent for a bowl of hot soup, a briefing and the road-book. Each team gets a different starting point along the same 60km route. We set off in convoy to find the 10 Dutch flags that are hidden along the route. Our young flag hunters eagerly track them down. We’re amazed to see dust in Holland! It’s been very dry with this recent cold spell. The smell of diesel and dust evokes memories of many a road trip.

There are challenges en route for extra points. The first is some gravity-defying rope work where we’ve got to answer riddles tied onto tree trunks. How do they come up with these ideas? A couple of flags later, we’re split into ‘senders’ and ‘receivers’ and given a flashlight to code/decode messages using morse code. It takes a while, but we figure out the dots and dashes.

Okay, bonus points for correctly answering: “What are the Big Five that lives at Beekse Bergen?” Every self-respecting South African knows this: two cats – lion, leopard and three (ginormous) herbivores – elephant, rhino and buffalo. We were about to write that down… But the team remembered the confirmation email for the Bikkel weekend. It painted pictures of polar bears, penguins and other arctic mammals replacing the big five. Hmm, was this a trick question? We gave the latter as the answer. Wah, wah, wah … Man, it hurts to get this question wrong!

Back at the Safari Park, we hand over our flags to the marshalls. Team Netherlands opts to bbq next to our tents instead of the club tent. Later we’re all gathered to throw eggs at each other in the dark, backlit by headlights. Standing two metres apart, I catch the first one. At 3 metres, Marcel catches the next one. At 4 metres, Marcel tosses a tall one over my head. Can’t say I’m sorry to see it smash in the snow. Didn’t fancy frozen egg yolk all over my jacket 😉

Next, each team fetches a spare wheel. The goal? As many people standing on it without touching the ground. First teams manage 8 and 10. We devise a quick scheme and deliver a magnificent 13 … great teamwork! Lastly, a tug-o-war.

By this time, I’m feeling every nerve in my bruised ribs from last week’s fall on the ice at FurstenForest. Every time I breathe, my body yells, “crazy fool!” but I can’t stand aside and do nothing. We tug and tug but succumb to the other side. The next battle is evenly matched until we hear a “thwack” and both teams land on their butts. The thick rope snaps in two!

After a nightcap, we can’t delay the inevitable. It is now minus eleven celcius! Are we going to survive the night? You can hear the ice cracking as we open the zip. Marcel lights the gas lamp to create a bit of warmth, but it flames dangerously close to the tent. He needs to warm up the cylinder to get it stable.

I know it’s cold when Marcel climbs into the sleeping bag still wearing his ski pants and thick jersey! We try to fall asleep, but it’s bitterly cold. Then my honey remembers that the air vents are still open, and goes out and closes them. It makes a difference but we’ve never been this cold! A couple of times I wake up and Marcel is lying too quietly next to me. In a slight panic, I hold my breath to listen for his. Oh my word, this isn’t fun at all!!

Is it getting lighter? Sounds like lumberjacks are busy nearby. The chainsaw gets louder and louder until it sounds like it’s threatening our tent flap. “Wake up. Breakfast in the club tent.” We look at each other and smile.

We made it! Enjoying our egg sarnie we joke about Bear Grylls sleeping in a hotel during filming, and wonder what would be worse: eating the disgusting stuff he does and staying in a warm bed, or enjoying the delicious nosh the LRCH catering commission prepares for us and freezing our butts off. A tough choice!!

The Offroad/Allroad committees have set out 10 different ‘trials’ in the forest around us. We have half an hour to get 10 cars through the challenge, before moving on to the next one.

Marcel tries Rusti on the first one, but the tow hitch digs a trail. We’re really missing “Muddy Boots” who’s “on sabbatical” until the summer. Instead of marshalling us, the committee actually helps us with our trials. Eric is not only invaluable to our team but also kindly offers us the use of his 90! Dank Je wel 😉

Our team doesn’t come in the top three, but we don’t mind. There’s always next year and we’ve had a fabulous time getting to know each other a little better and playing with our favourite English offroaders. A HUGE thanks to all the volunteers who got this event together, it was ice cold – but fantastic!!