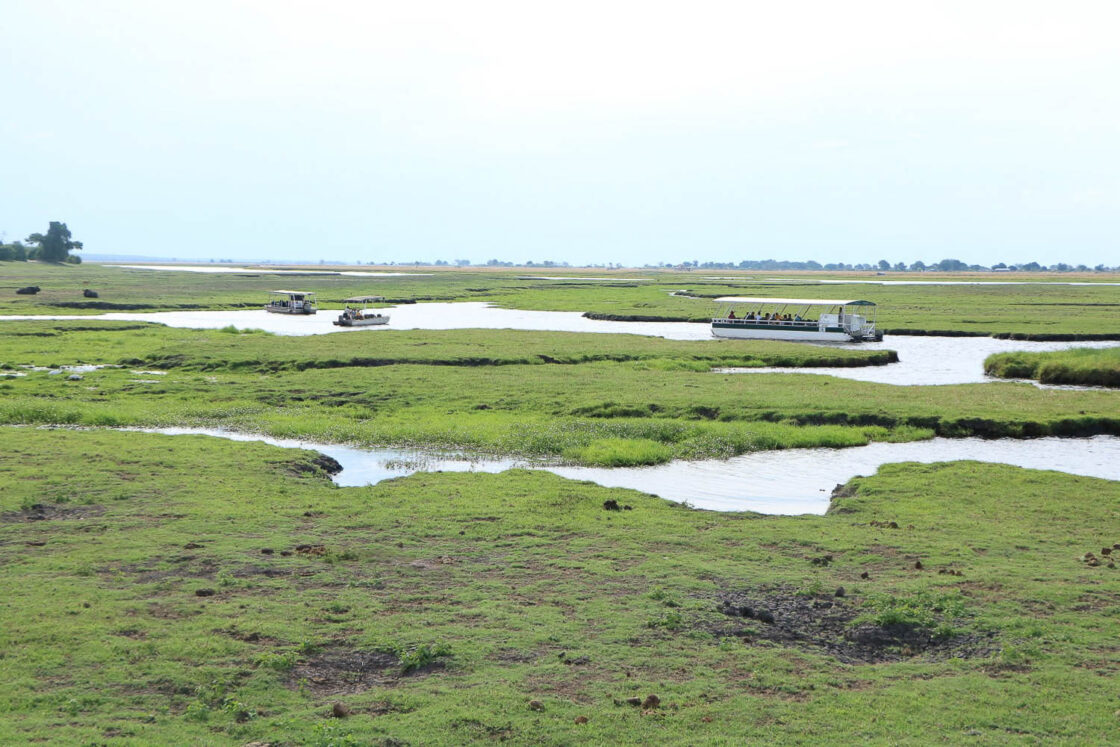 We were exceedingly lucky to catch the last big cruise boat of the day. It is a large, covered, open-sided ‘barge’ – for want of a better term. Certainly not built for speed, but being flat-bottomed it is ideal for approaching the shores of the river.

There is an open viewing deck up top, not shaded but giving a perfect vantage point for photo opportunities. I reckon you could get about thirty people on board, each in their own safari camp chair. And there are beverages available – like a cold beer – for an additional cost.

Our guide was well presented and knowledgable. He focussed on the birdlife as well as the larger animals. And, along with the skipper, managed to find quite a lot of wildlife!

What was interesting was the history of the island – ‘Sedudu’. This is in the middle of the Chobe River channel, which marks the international boundary between Botswana and Namibia.

The island is about two kilometres long and a kilometre wide and is flat and featureless consisting of marshy wetland, yet was the centre of some controversy between the two countries. Each of whom laid claim to the land. Namibia maintained it was within its borders and wanted to use it for crops like rice paddies.

Botswana disputed the claim saying it was a part of the greater Chobe national park. This continued for some time until it was brought before the international court of justice in The Hague. Eventually, they resolved to measure the depth of the channels on either side of the island. The deeper channel signifies the river itself and the shallower channel is the tributary.

The shallower channel was on the Botswana side therefore, as the river is recognised as the border, the island belonged belongs to Botswana. They promptly planted a flag as a reminder to their neighbours and have incorporated it into the Chobe Conservancy. Arguably a better use for it than crop fields…

It is a pleasant trip floating along, nosing into the bank next to a crocodile, elephants passing by in the distance, monkeys chattering excitedly, hippos snoozing or disappearing into the depths. An eagle calls out and flaps past – the call of Africa. A buffalo grazes lying down, watching disinterestedly as we pause for some photos. The birdlife is abundant and varied. The sun is hot on the upper deck, but it couldn’t be more perfect…

It is well worth it, if you can spare an afternoon, and a welcome contrast to the hot, dry game reserves like the Sand Ridge Road in Chobe that went on forever in the blistering heat. It is a wealth of wildlife in the middle of a very dry area.

The office at the Chobe River Lodge can organise the boat trips, on smaller boats as well, as well as game drives into the Chobe Flood Plains and along the banks of the river delta. I don’t recall the exact amount but it was very reasonable for the amount of time on the water, and a pleasant way to chill from the dusty drive to get here. Thumbs up for me!