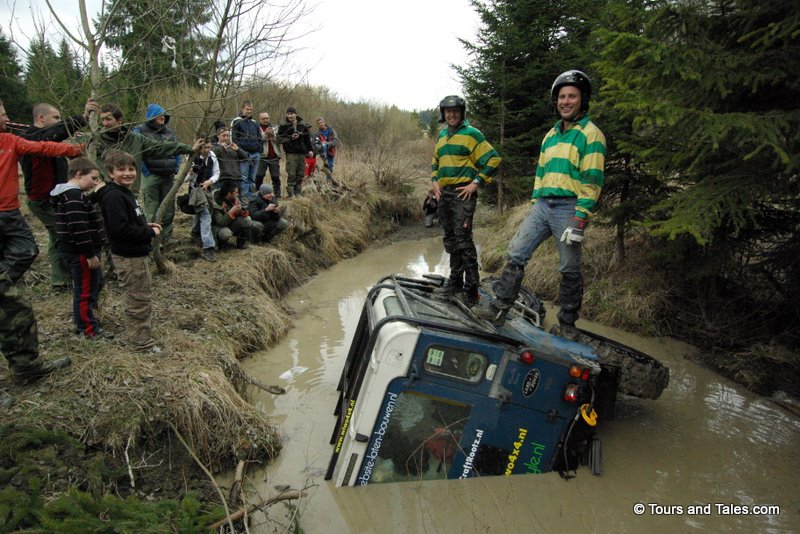 This was going through my mind as I waded full-blast through the previous ‘waterhole’. Good fun, so I assumed that the next one was pretty similar. The only difference was that there was a ‘checkpoint’ on the right-hand side. So I aimed towards that tree and cautiously entered the water…

The car began leaning a bit, but I assumed it would level out and kept going… Without a top-winch to strap onto a tree, we had no choice anyway.

In (very) slow-motion the car kept on leaning over as we inched forward, with the engine idling. Water was making its way into the car – first, our feet got wet, then the seat, dashboard and steering wheel and eventually I watched in horror as the snorkel went under. The dashboard seemed to succumb to the brown, muddy, icy water like a ship capsizing in slow motion and before I could react, the motor died…

Simon was out of the car like a shot (maybe expecting something?). He didn’t even get his feet wet! I waited a second or two for Muddy Boots to settle on his side and then tried to lift the car off the bottom, as you do! In some crazy way, I thought I could pick up the car onto its wheels and we could drive away…?

This tactic obviously didn’t work so I stood up and stuck my head out of the passenger window – to a round of applause from the spectators.

How do you get instant celebrity status by going swimming with your landy?

I immediately assumed the worst – the car is dead. And a week before our debut in Croatia Trophy! But the Polish spectators didn’t just stand there… They shouted advice and offered to help to get the car out. We gratefully accepted and tried to use our front winch to move us out of the ditch but the wheels were stuck pointing in the wrong direction.

The rear winch was hydraulic, so completely useless since the engine had died. It was basically just extra weight to remove out of the water. After an hour of ‘creative’ winching, we realised that we might need to leave the car behind. But a local pro – ‘crazy Wojtek’ – brought his old Isuzu 4×4 and proceeded to tow us onto ‘dry-land’.

Using our basic tools a couple of Poles removed the injectors and got the engine running again. A huge thank you, especially to Martin, for spending an hour draining the water from the pistons, air filter, turbo, manifold and more.

The water was icy cold and due to my theatrical driving as well as spending an hour up to my armpits trying to get the car back on dry land, I had earned the nickname ‘Aquaman’.

The engine started the first time – kudos to the 200tdi – and we drove ourselves out of the riverbed. A lot of luck that there was no damage and a rather steep learning curve. In one way it was frightening – have I ‘killed the engine’? And on the other hand, what a great experience.

Within an hour it was on Youtube and Facebook and as we made our way back to our ‘camp’ to try and straighten out the steering arm the rest of the competitors had already written us off, laughing at the rookies from Holland… Okay, granted, today we retreat but we live to fight another day!

Still in the fight…

The expressions on their faces when we appeared at the start of the next day of the Orawa Competition was priceless! We might even have earned a little respect and we set about tackling as many checkpoints as we could, ending in 14th position out of 27 (most of it for turning up)!

We had plenty of penalties though, for not being able to read Polish and winching in the wrong order! Haha! What a bunch of amateurs (us that is)… Now on to the Croatia Trophy!