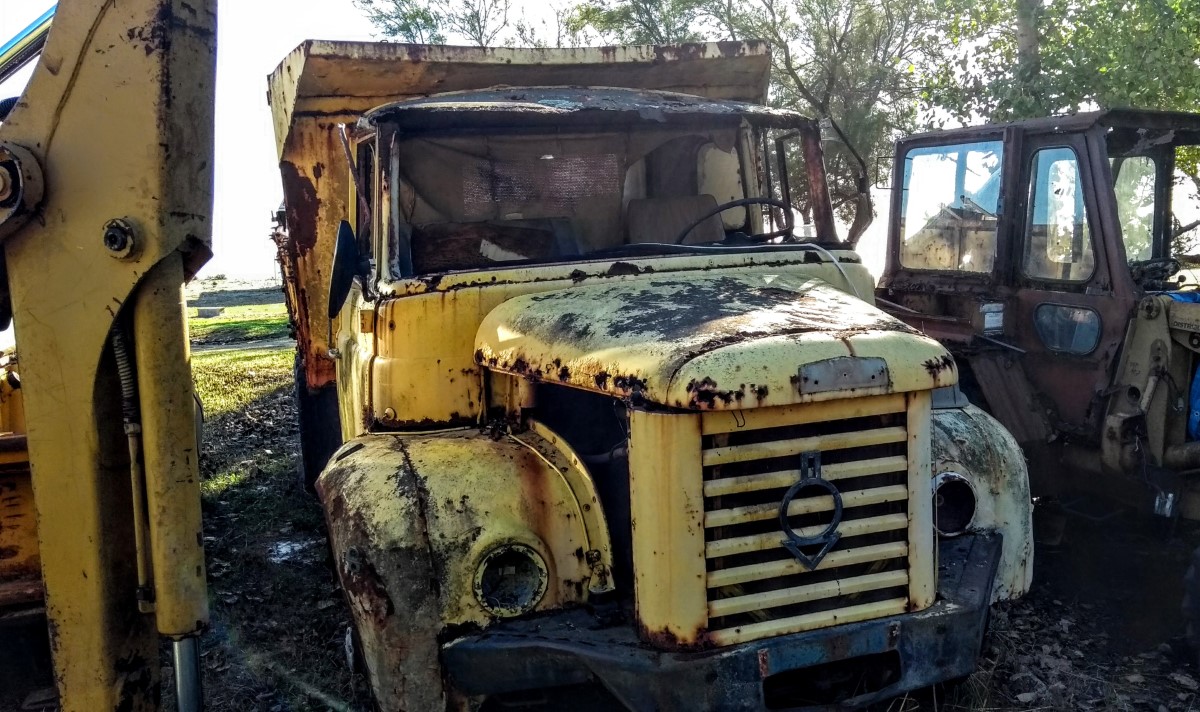 The rattling bonnet reverberates in tune to the tired, sluggish, loudly bellowing old engine straining to clamber up the narrow pass heading away from the Corsican coastline. The driver’s seat shakes and trembles. Reach for the tall gear lever. The long wand is stirred around looking for a gear, any gear. Loud grinding as the gearbox refuses to comply.

Pump the clutch and try again and the grating transmission resentfully allows the coupling. Painfully slow progress resumes up the hill. A thought as to whether this load of gravel is larger than normal. Elbow on the windowsill and three fingers loosely on the large, thin-rimmed steering wheel.

The old diesel growls, surges and grumbles. The gear lever trembles and the transmission whines away obtrusively. All sounds normal. The hand comes off the gear stick and blindly searches for the lunch tin on the adjacent bench seat and finds the last of the sandwich.

It is a white bread triangle with a thick layer of butter and an impossibly thin slice of cheese. A layer of lettuce pokes out the side. The homemade freshness battles unsuccessfully with the underlying scent of oily smokiness emanating from the leaking valve cover gasket. A damp smell from the half-inch thick layer of sand under the brake pedal goes invariably unnoticed.

Dust particles hang motionlessly caught by the sunbeam piercing through the cab and striking the lifeless speedometer. The fuel gauge needle swings languidly showing alternatively half full and nearly empty, depending on the undulations in the road.

A glance in the door mirror. A train of impatient cars snakes behind through a murky cloud of diesel smoke and engine roar. Another rusty fragment of yellow paint flakes off the load bin and wafts to freedom.

A flick of the eyes at the rear wheels and a mental reminder to torque the wheel nuts of the off-side wheel after the tyre was replaced last week. That old rubber hoop was considerably ‘tread’ bare with the canvas already showing through.

The sandwich-filled hand comes up to the mouth and hesitates halfway as an old 1980s song reaches its chorus and gains an extra band member at full volume. The words aren’t correct; off-key and off-beat but it doesn’t matter. An imaginary crowd, glittering in the rays of a disco ball, raises their arms in approval.

The small transistor radio dangling from the rearview mirror on its little plastic lanyard spins around swaying with the motion of the lorry. The retractable aerial tick-ticks against the windscreen. The tinny music noisily broadcasts into the empty countryside. Perhaps the cows lazily munching their grass on the steep, rocky hillsides will appreciate it. Maybe they even know the words, but they’re not saying.

A glance to the edge of the road, the cliff-side barely half a metre from the tyres. A helpless and deadly tumble into the steep ravine awaits those who do not remain aware. No barriers here. Far below, the river continues on its way through the boulders. The other side of the twin-lane road reveals a steep cliff face that reaches so high you can’t see the top. Dry, hot, remote and foreboding.

Rounding the bend, the summit of the road comes into view. A playful tap on the wheel and a whisper of encouragement. We’re nearly there, then we can coast down the other side. A bite of the sandwich; a hint of pepper. A couple of cars surge past, one of them hooting. A knowing grin and a friendly wave. It’s a hard life, but a good one.

I found this old, rusty relic lying amongst a row of old abandoned equipment (backhoes, tractors etc.). It was (possibly still is) at the entrance to a campsite on the Corsican east coast.

Old, vintage vehicles and even unsalvageable relics have a certain mystery and a story to tell. Interesting lives led. Many journeys and travels. Hard-working. And good to see they are being reclaimed by nature.