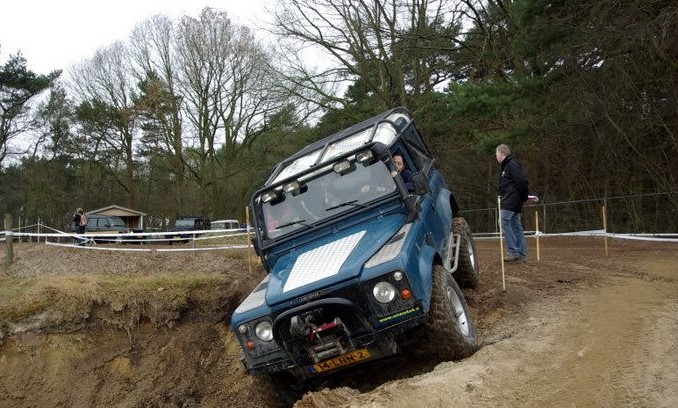 It was pretty cold and very misty. You could see only 50 meters on the roads and it remained that way, pretty much, all day. Our destination was some coördinates in the shade of the Prins Claus fly-over near The Hague, Netherlands. Because of the fog, it became a mysterious adventure. Mentally, we were heading for the “bush”.

It seemed as if ALL the members of the LRCH had received the message that a new offroad site had been found. This is a big deal in Holland – somewhere you can, legally, get your tyres muddy. Just some piles of sand really, and (very) busy!

Even to park the car in order to sign up, you had to wait until someone exited the area so you could get a spot. And that in itself was an achievement to get to! Winches and ropes brought into action, tires became ‘slicks’, deep ruts. And the clay, the clay…. IT was great to watch. And subsequently, end up being stuck in as well. You had barely signed-in, and still at the club tent, giving full throttle but going nowhere!

Because of a repair, we could not take our ‘Muddyboots’, so we had little alternative but to show up with ’Rusti’. Our Disco 1, on normal road tyres. Even the competition vehicles were struggling on certain parts…

As always, there are plenty of people willing to help drag you out of a tough spot. Everybody got stuck at least once, that day. Just on the flat ground at the club tent. But the Offroad Commission had once again done its best to set out some trails. Some of them were extended routes through long grass where you felt as if you were on safari. Other, blue, paths were soon turned to red-flagged challenges – yes, that slippery clay. Steep “mountains” had to be conquered along with deep puddles. For everyone, there was a challenge.

Lost in the fog

We spent a few hours and probably didn’t even seen half of the site. Through the fog, we had trouble orienting ourselves, so the terrain seemed very big. It was a bit strange to drive through the reeds into the fog, and suddenly out of the gloom looms a commuter train heading for Utrecht? And behind that, you see a faint shadow of the highways.

Fortunately, we were able to follow the ribbon trails they had set out for us. If we had been issued a roadbook, that had to be deciphered in the tall grass, then we would probably still be there, looking for the exit!

The club tent was cosy and warm, where you could thaw out your fingers with coffee or soup. And find that you actually have too little time to have a chat with everyone. A big thanks to the committees for organizing another special offroad day. We looked around and saw only big smiles among the hundreds of cars. Two words: worth repeating.