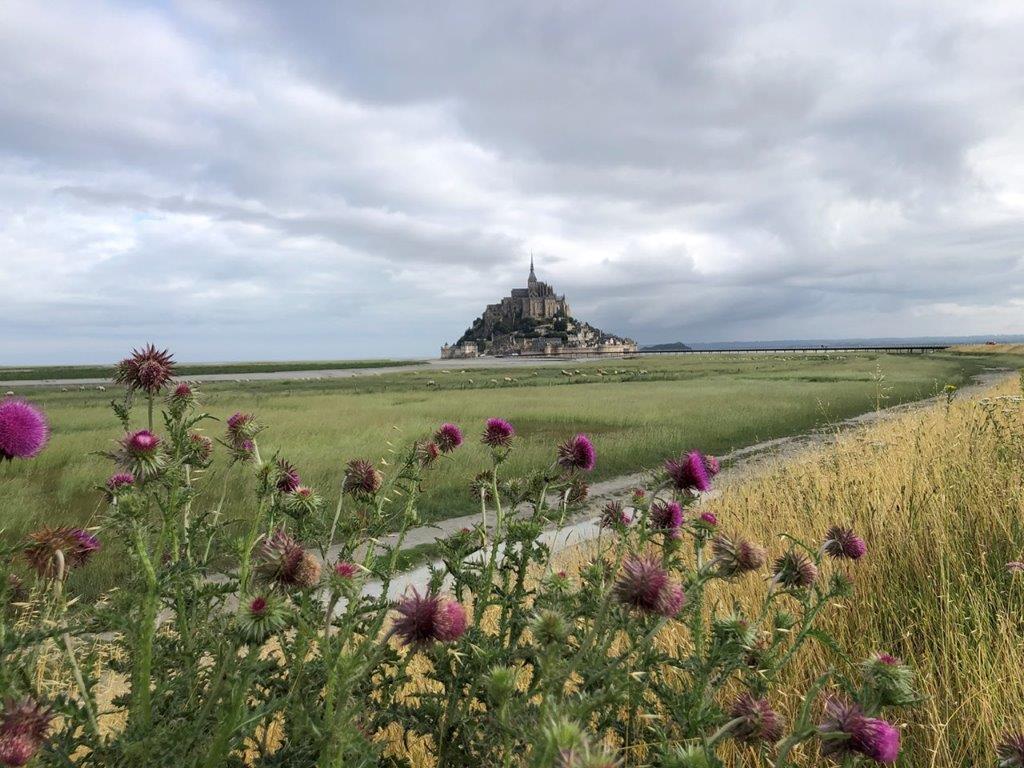 One quick tip before we dive in – get here early in the morning if you can! And BTW there’s no need to check the tide charts anymore…

What isn’t immediately apparent is the scale and the amount of building works on this isolated tidal rock. What started as a sanctuary in the 700s (yes, when the time was still measured in triple figures) has had a wide and varied history. A church, an abbey, a fortress. Even a prison.

In fact, it formed an impregnable stronghold during the Hundred Years War. The ingenuity and engineering on display that took place in the middle ages over 800 years ago are simply incredible. While the granite island certainly did limit the footprint available, it certainly did not limit the scale of their ideas, nor the grandeur they wished to project.

What I did not immediately put together was the archangel Michael being in fact – St Michel! It now makes a little more sense… Yes, call me a slow learner…

Visiting the ‘island’ is free to tour the lower battlements and village but entry into the abbey and higher parts of the building costs a well-spent €11.00. This is a definite must! It may appear expensive and is to some, but only by visiting the upper works can you really appreciate the scale.

The number of different halls, chapels, crypts, alleyways and the grand abbey itself boggles the mind. A dozen large halls with different themes are connected by labyrinthine tunnels and spiralling stairways. Thankfully there is a guide through the buildings!

From each corner, there is a view out to sea, across the estuary or back toward the mainland. The size and complexity of the layout are simply jaw-dropping, especially considering the remote area in which it was all built. Remember, this is a tidal island (now connected by a permanent road bridge).

The 2.5-kilometre walk starts out from the complex where hotels, restaurants and a campsite can be found. And also, of course, the many parking spaces where you will need to leave your car behind. If you are older, or lazy, or maybe just clever there are regular shuttle buses to and from the mainland.

We elected to grab a pitch on the campsite. Which was perfectly agreeable partly due to the site being only half-full despite a junior school bike tour.

I think this is partly due to an amount of confusion in reaching the destination or perhaps limited access (there is a barrier at the main road). The existence of the campsite is not very well signposted.

There are large, shaded, grassy pitches and a large ablution block for a reasonable €20.00. However, you need to budget another €10.00 to gain entry into the complex for the car. Maybe we’ll take those bicycles next time!

From the campsite, we set out for the island at around 9 a.m. and a fairly brisk walk had us there in about half an hour (allowing for photographic stops!).

We spent about an hour and a half doing it all justice – which is fast – because we were on the clock (excuse me, sir, you are to leave the campsite by noon if you please). And we were aiming for Saint Nazaire for the evening

Exiting the very impressive building works of the abbey above, we came down the main street lined with shops, cafés and some restaurants. It was getting busy at this stage of the day and I was struck by the parallel of present-day versus medieval times.

The silence and reverence of the great halls and chapels above contrasting with the hustle and bustle of the ‘commoners’ down below. Or that’s what I imagine they were back in the day (too many movies, I guess)…

I will admit to having turned down many a request to visit Mont Saint-Michel from my better half in the past. As a destination, it did not look too exciting and I wasn’t too keen on masses of tourists jammed into what is, in effect, a dead-end!

How wrong I was – and am now facing some well-earned ‘I told you so’s…’.