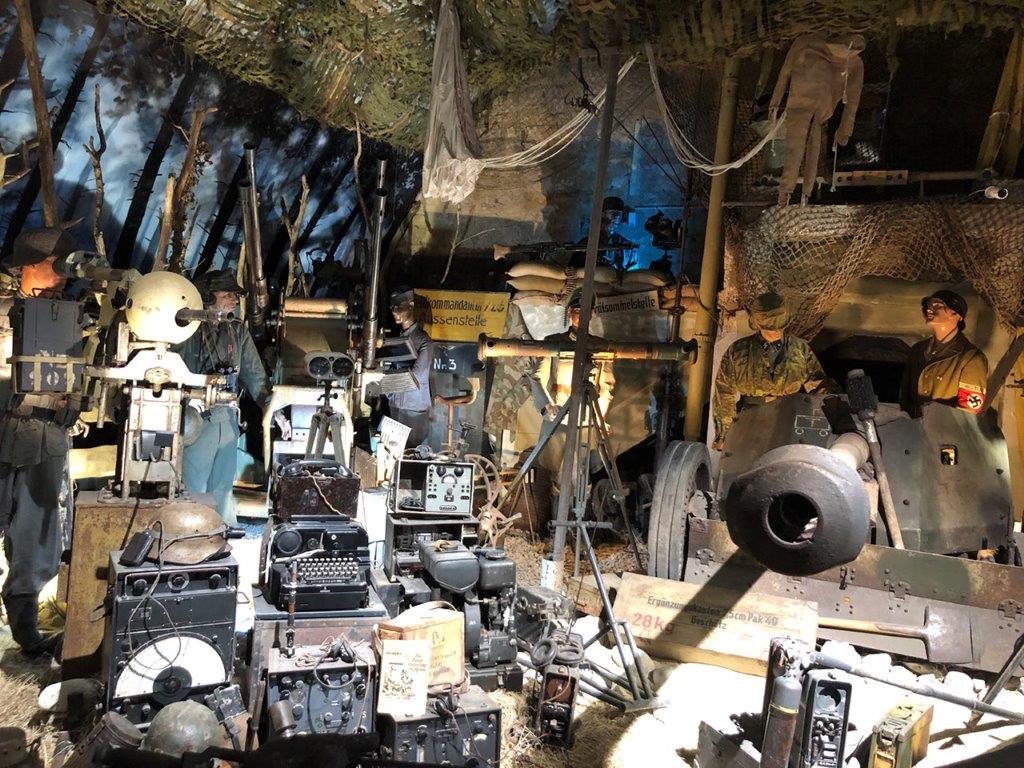 The Normandy coastline from Caen to Barfleur is a must-see destination with dozens of museums scattered about the countryside, each of which is worth an hour or two.

Having pitched our tent on the windiest pitch on the Omaha Beach campsite we visited just three of them – although there are dozens more – confining ourselves to the general area along Omaha Beach.

We have been to these shores before and have spent a good week travelling around the countryside and visiting all the museums. I think it was monsoon season back then as well…

This was roughly thirteen years ago, and time and tide conspire to cast a favourable hue on your recollections. So we were quite keen to re-enact our experiences.

We drove a good total of 300 metres from the camping entrance to our first stop! The D-Day Omaha Museum is just outside the village of Vierville-Sur-Mer which is itself at the far end of the long and sandy Omaha Beach. It is also, as luck would have it, at the entrance to the campsite so a short drive brought us to this rather fascinating place.

This museum started as a collection of thousands of pieces by Mr Brissard. Your first impression is of a simple building – A type of large, round-roofed warehouse in the form of a Nissen hut, I imagine built by the Americans back in the day. A London bus hides in the corner (now the restaurant diner) and a number of large pieces (naval guns, an old bulldozer..) from the 1940s can be viewed out front.

However, on entering the building a most fabulous display greets you in the dark, moody interior. The displays have two themes, fairly obviously German and Allies. This setup can be found in many other museums but what sets this one apart is the amount of detail and number of smaller items that give a deeper insight into life during those times.

The village has a particularly interesting history in being well documented with descriptions of life before, during and after the D Day landings. Another section has old cigarette boxes, wine bottles, passbook stamps, bicycles, old propaganda posters, resistance equipment, some rare vehicles, a war correspondent’s camera and specific helmet and even an enigma machine. A lovely diorama depicts how this part of the beach would have looked.

Outside are a landing craft, searchlights and a fearsome-looking anti-aircraft gun of considerable scale. I found it to be far more than the sum of its parts being very detailed, focussing not just on the weapons but offering a glimpse into life in the ’40s during a terrible part of European history.

Well worth a visit with an enthusiastic and friendly welcome by the front desk and a €6.00 entry fee which helps to conserve the good condition of the exhibits. Perhaps grab a quick burger at the old double-decker bus and reflect that it would be hard to top such a well exhibited and comprehensive collection.