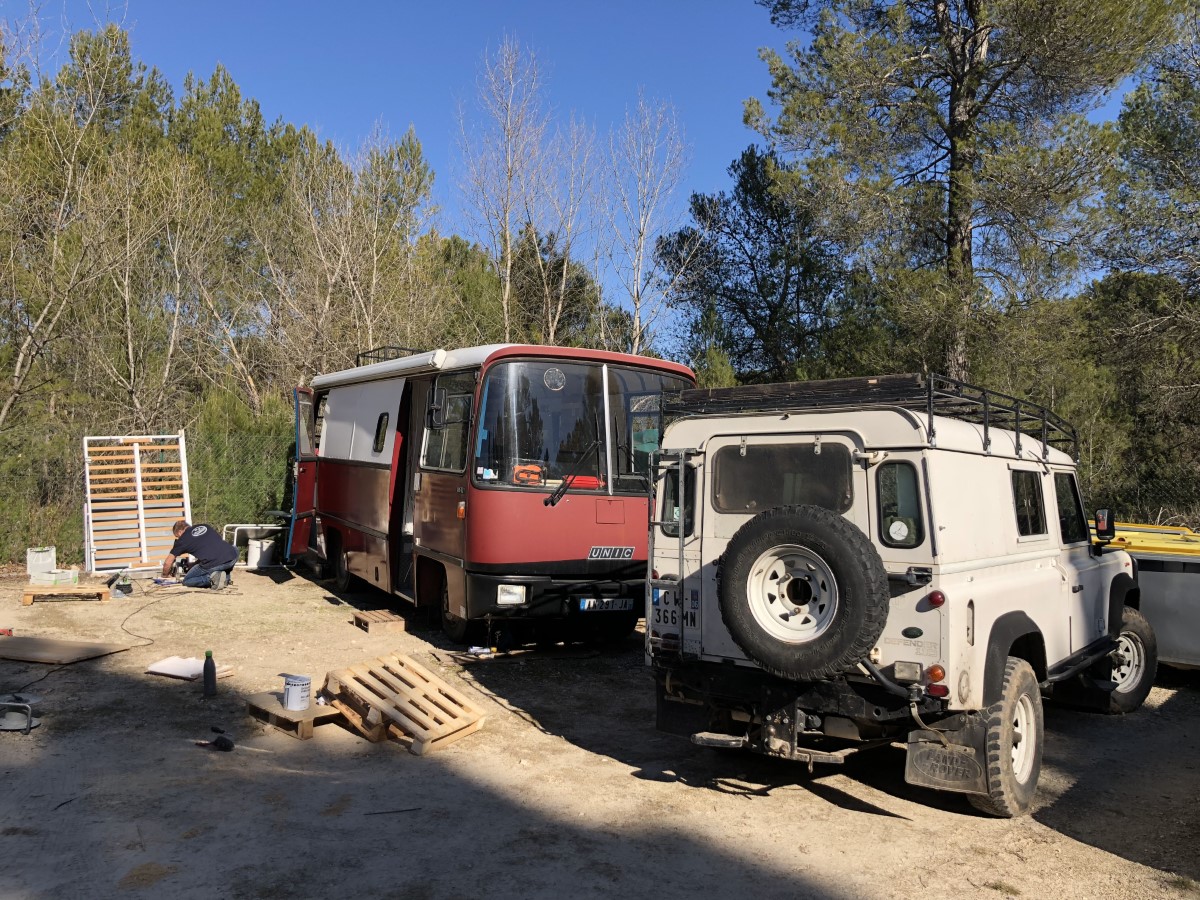 Actually the old Defender 110, Dakota – with excellent insulation – is not too bad during the winter being very cosy in the back even when it’s rather chilly.

But when you are considering a ‘tiny home’ you quickly realise that a Land Rover simply isn’t big enough. You are going to need some extra space for all the things we drag around with us through our lives.

Things like snow shoes, frying pans, mattresses and extra toilet paper. Time to upgrade, if not in luxury then in size.

Our first option was naturally a Landrover 101 Forward Control – uber cool, but not big enough to have a permanent bed and a shower. Likewise, the funky Citroën HY, Renault Estafette and iconic VW Camper vans fell away for the same reason. The Peugeot J5 had funnily enough become the basis for the camper vans we love to hate (we’ve all got our faves).

Marcel’s skill at trawling the interwebs delivered a few possibilities. The Mercedes 508, 609, 611, 612 were big enough but not many met our requirements. We came across a delightful Iveco Unic bus that had served as an army troop carrier, but had already been converted into a camper … with a shower and a loo!

If you want to see how we’ve made it our own, check out the playlist below:

Pepé was named for being a mule (in a movie) which is what a bus kind of is… But mostly for being a butterfly (in Samoan). It has that kind of look from the front. And our plans would turn it from a motionless caterpillar into an adventurous, capable house on wheels, with minimal impact and footprint… Or something along those lines.

The guy we bought our bus from was a hippy-looking dude that had been using the bus as a campervan for many years. As such it was ready to go however he was also much shorter than I am. This meant removing the flooring to gain some height. Which led to removing the whole interior and starting again. Ah, the best-laid of plans…

The biggest advantage that a bus gives you is width. A nearly 2.3 metres interior allows a double bed to be arranged in a north/south length aspect instead of across the width as in most campervans.

A larger space for the bathroom and a reasonable kitchen was also possible. And though this may sound self-indulgent this bus is to serve not merely as a holiday transport but as our permanent residence. So a bit of relative comfort was envisioned where possible.

My own biggest hurdle was to try and keep to a reasonable budget while delivering a quality result. It is extremely easy to go overboard and some of the specialist caravaning products can get quite expensive. At which point do you consider just buying a fully equipped campervan? But losing out on your bespoke charm, look and feel?

So while I am not going to bore you with the extreme details of the build, except to say it was an enjoyable labour of love with many hours invested, what I can tell you is that this started life as an Iveco bus.

Built on a seven-ton chassis with a 120-horsepower engine that makes a lot of noise. A five-speed box converts that noise into forward motion and you could hit 100 kilometres an hour if you’re committed enough, but as soon as you hit an incline the fun is definitely over. It is a lot of fun behind the horizontal steering wheel (no assistance) and the agricultural growl from the old 5.4-litre diesel makes our Land Rover sound positively smooth!

At seven metres in length and a little under seven tons gross weight, this permits us to traverse most roads – some of which are prohibited for larger vehicles. So the idea here is to try and get the best of both worlds. A large enough interior without becoming too unwieldy in real-world use.

What’s it all about?

Campervanning has become disproportionately popular. Meaning a rise in popularity that could not be predicted even five years ago. Combine this with the equally accessible and voguish tiny house living and you have a recipe for a global (yes) shift in decreasing our individual footprint.

Just look at the increase in the number of campsites and campervan parking sites. It is no longer a parody of caravanning holidays from the 1970s, it’s actually big business and everyone is getting in on it.

And therein lies the challenge as well. At least, to me. Trying to get as much done on as small a budget as I can. It is at once a frustratingly complicated endeavour and also rather simple in what you are trying to achieve. Shelter, plumbing, lights and heat… And maybe throw in some storage, comfort and style.

This is fairly obvious, in my opinion. Go where you want, and stay as long as you like. If it doesn’t strike your fancy then you move on. If it does, then you park up for a few days, weeks or months.

If you’re trying to stay ahead of the winter weather or chasing those amazingly red sunsets. Or you’ve encountered similarly minded individuals with which to exchange a game of tactical bridge or a strategic hand of poker. It may sound trivial and boring but when you look up, over your particularly strong hand of cards, onto a Spanish sunset things seem quite different.

As we speak the interior is basically done, and all we need is some solar panels, a converter and a hot water system. Luckily the old engine is still in fine fettle, with simple mechanicals and pleasingly analogue.

The (re)build took about a year (off and on) on weekends and a day off here and there. As mentioned there was a fine balance between the budget and the result we were shooting for. And let’s not forget that you trade in some amount of comfort compared to a modern campervan – but they’re all pretty generically boring, right? We’re looking forward to being able to live in it on a permanent basis!