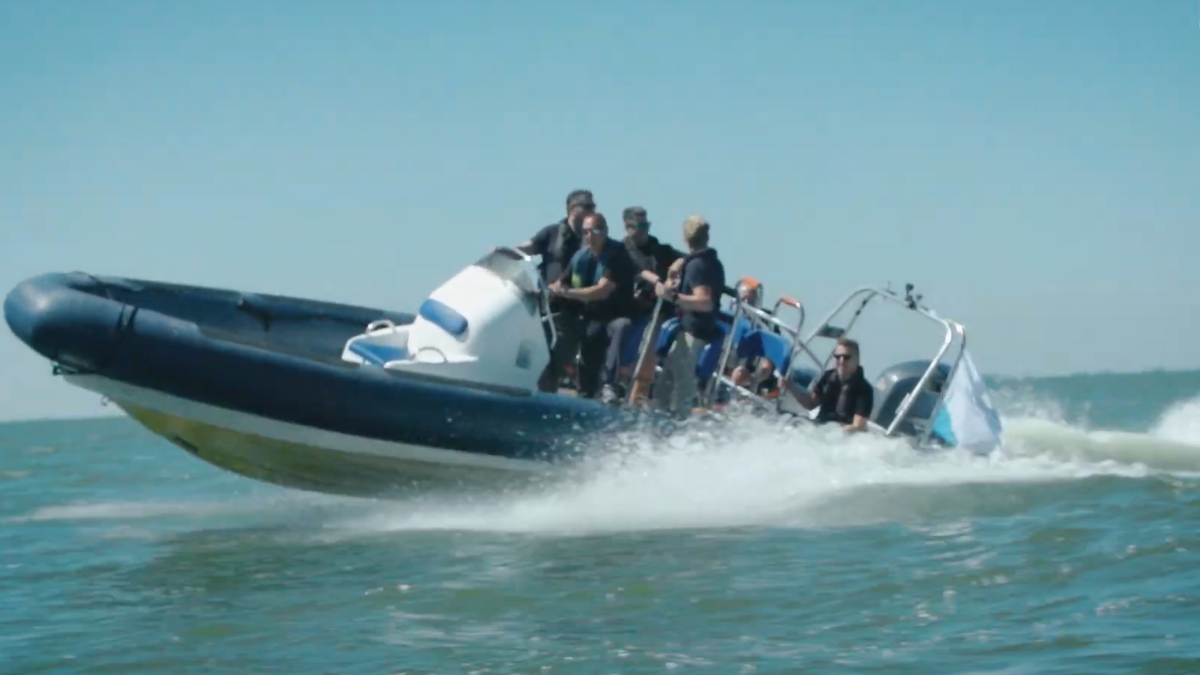 A RIB or Rigid Inflatable Boat is instantly recognisable with its inflatable rubber tube around a rigid fibreglass hull. Also affectionately known as a ‘rubber duck’, these boats were developed initially as lifeboats. However, their shape and seaworthiness allow for a great big motor to be hung on the back.

Great big motors mean great big horsepower. Which equals great big speed! 300 horsepower is more than enough to propel this five-metre-long boat to a maximum speed in excess of 90 kilometres per hour. To those of a nautical bent, this is somewhat more than 46 knots.

It is hard to describe what this feels like over the water. You need to hang on here as the boat does get tossed about, jumping, thumping and racing over the waves. The wind whips around and tries to liberate anything that is not securely fastened. Like your hat, your sunglasses or your coat.

The skipper pushes the throttles even further and the big Yamaha bites with even more force, sending a roostertail plume behind the boat. The thrill is exhilarating. Akin to what I imagine a low-flying aeroplane skimming over the water would be like. This is faster than you’re allowed to drive on some public roads, so imagine having no windscreen, no roof above your head and no doors on your car at these kinds of speeds.

There aren’t many people with access to a rocketship but luckily we know some people at Lelystad RIB Experience. They have two of them. You can hire the boats for (part of) a day for a group of about eight people. More importantly, Marc, Rob and Bert are very experienced professionals. They have a combined skill and capability spanning decades on the water and know the area extremely well.

They exude professionalism and safety above all. Anyone can go fast – just floor the throttle. Doing so with a natural skill, flair and familiarity doesn’t come from being a cowboy.

Jump off point for Lelystad Rib Experience is Lelystad (the clue is in the name). This town has a rich nautical history. Fifty years ago it didn’t exist and in fact, the polder of Flevoland was created by putting up a dike around a large section of the Zuiderzee, pumping the interior dry and hey presto, you have land on which to build towns, settlements and villages. So you could argue that Lelystad has a very intimate relationship with the sea.

What you may not know is that Lelystad has a large yachting community with six harbours, which give you access to the Markermeer and Ijsselmeer. A big playground and if you wish to visit Amsterdam – it is just half an hour away (at speed, of course).

Other options are the Pampus Island museum or perhaps a high-speed run to the outer Frisian islands. A popular destination is the Markerwadden. These man-made islands were created to promote the ecology and birdlife on the Markermeer. Get your adrenaline rush on the way there, spend some time exploring the island and then head back at a rate of knots!

You can also combine a visit to these islands with a bit of speed over the water and end the day in the restaurant – Club Port Side – for a delicious meal or a sundowner overlooking the yachts in the harbour.

So if your looking for an adrenaline rush on the water with a bunch of mates come here to the Markermeer. You’re in for some speed, wind in the hair, sea spray, low flying and big smiles. And the skipper will get you there and back in style and safety and as much of a drenching as you want!