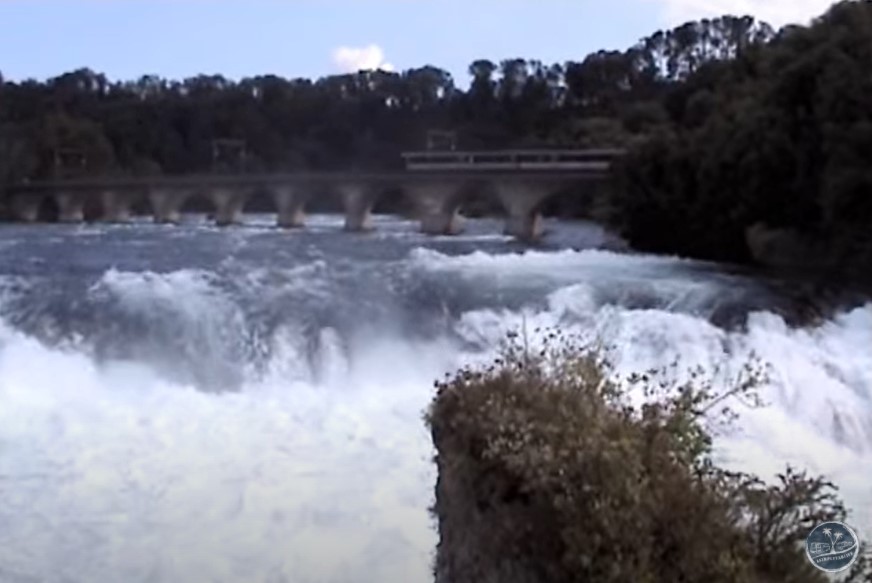 Just two days before heading to Switzerland en-route to Italy, cousins Ina and Andries showed us their video of Rheinfall in Schaffhausen … well Neuhausen actually (they’re about 3 km’s apart). It looked awesome…

It was our first day of travelling and we’d spent about 8-9 hours in the car before reaching Neuhausen, so we grabbed the chance to stretch our legs.

The first thing that struck us was the number of tourists! Among others, there were busloads of Chinese, Jewish, Dutch and Germans all heading towards the falls from every which way. I can’t remember seeing so many people in such a small space. Ugh, crowds are not my favourite thing … but that’s not going to dampen our spirits!

We located the ferry ticket office, which displayed prices and routes plotted out on a large board. Switzerland is not cheap. Because this was a quick stop we chose one destination, the rock in the middle of the falls. It just looked amazing, with water sheering down each side. The boat ride across was quite mellow.

We both love being on the water. Until we got closer to the rock. Then we became less confident. The immense power and volume of the water were deafening. The current dragged us in towards the waterfall. Our intended jetty moved further to the left. Now we got nervous.

Then, as if miraculously, the water gently released us so we could slide into the dock. Phew! We scuttled up the stairs past the waiting crowd. Being quick and of the nimble foot, we were able to enjoy a micro-second alone with the downpour at the mezzanine viewpoint. It was awesome! … a word I used a lot.

As the rest of the crowd caught up, we headed up the next two flights of stairs. The sound that met us when we reached the top was overwhelming and sent shivers down my spine. I felt a sudden twang of abandonment as we watched our ferry pull away … until I noticed the next ferry heading our way. Talk about clockwork! We’re in Switzerland, what was I thinking?

It’s such a pity that most folks come here, take a couple of pics and then move off again happy to have “been there, got the snaps”. But I suppose if everyone stopped to enjoy the falls, the super-efficient conveyor belt would grind to a halt. However, we ducked into little spots where we could (momentarily) blank out the others and enjoy the spray on our faces.

It was simply breathtaking. Raw nature at her best. I wanted to stay forever, but after ferry-loads of tourists had come and gone, we felt the urgency to move on. We still had a couple more hours of driving and needed to find somewhere to sleep – à la bonne foi. Squeezing ourselves down the stairs, we caught the next ferry back to get to our car. Not before making a quick detour past the souvenir shop to buy a little cuckoo-clock to grace our fridge.