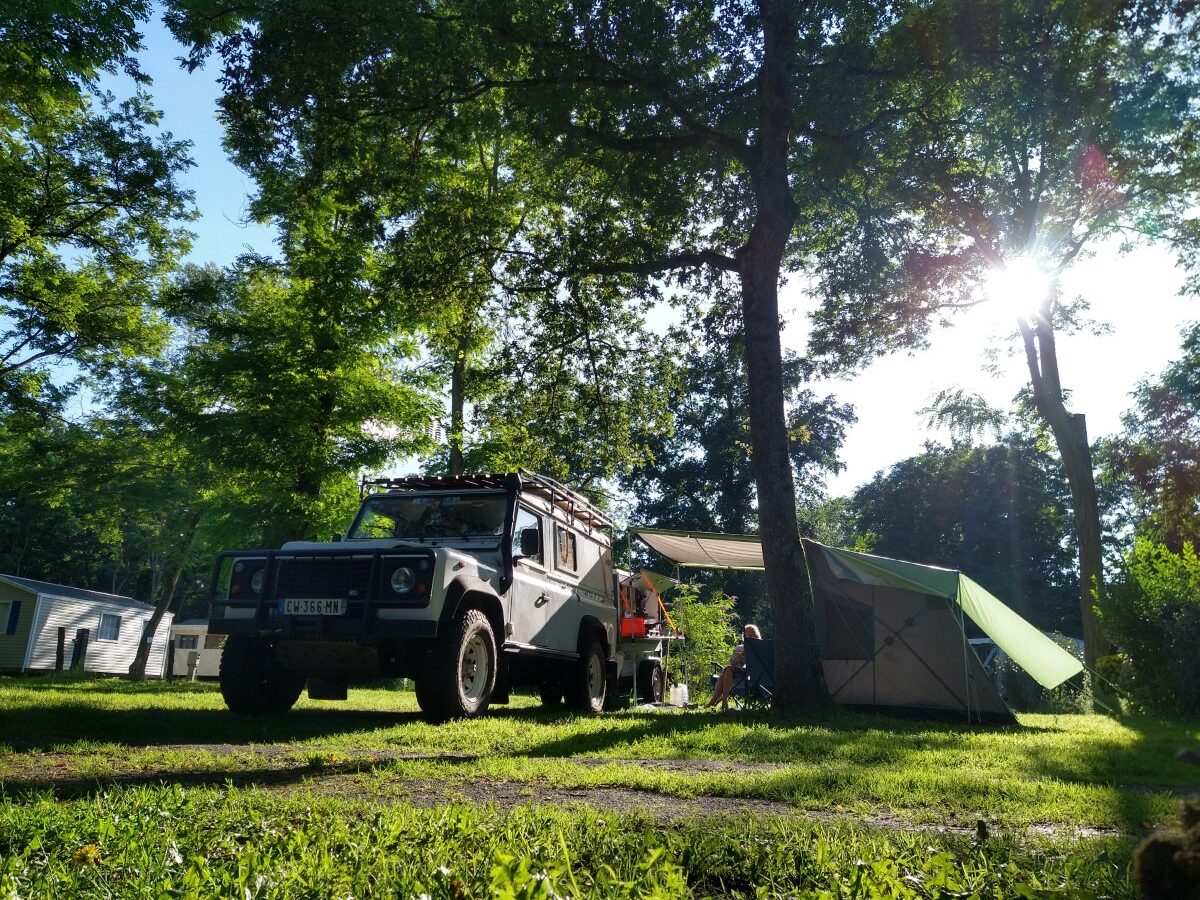 All good things must come to an end. What was shaping up to be a rather good jaunt around the coast gets its brakes rudely slammed on and we need to do a 180…

Why? The Bank (with a capital B). That’s why. We need to present ourselves in person at the ING bank in the Netherlands in order to get the bank account opened. And we were just ten miles from the Spanish border! What an absolute bummer…

So we pointed our trusty Defender back to the north and bit the bullet. The drive was not much to write home about – just many highway miles in order to get there as quickly as possible.

And that meant a healthy 600 km (ish) which was quite a feat in the old Land Rover! We reached the town of Tours that is a well-known stopover on the treks southward from northern Europe.

What seems to be an outlying suburb of Tours is the town of La Ville-aux-Dames alongside the Loire river, if you take the direction to Montlouis-Sur-Loire. The camping there seems to be well established partially shaded by some large oak trees.

As we arrived they seemed to be packing up after a large party and that night we had some pretty wholesome Polish guests going at it until three in the morning.

Which was interesting… But apart from that, it was a generic campsite and – perhaps not very flatteringly – rather grey in my memory of it.

What it did have was good grass on the pitches and clean and fairly-new ablution blocks (even a washing machine). The whole area is green and surrounded by trees giving plenty of shade.

There are cabins for rent as well and I suppose it is a good platform to go and explore the town of Tours (that normally gets passed in a blur on the highway…). However, we couldn’t stay as we needed to head further north and try to get to the region of the Belgian border…

We had put in a solid six hundred kilometres on the highway, all the way from Saint Jean de Luz. In a Landy, it is quite an achievement to still arrive during daylight including a couple of stops. Vic was famished and within ten minutes of turning off the engine the camp was set and the cooker was already frying mushrooms!

Why is this a big deal? Well, mushrooms are not at all a favourite for Vic, so when she’s cooking and there are mushrooms on the menu, just dig in and enjoy! It was a good meal and we chilled in the shade cooling down from our efforts on the highway.

To those who are not familiar with a Defender – it gets REALLY hot in the gearbox area (especially if you stay on the toll roads where you need to stay out of the way of the many trucks). This gearbox is right next to your knee and on a hot day it just doesn’t cool down. And there is nothing you can do about it! Just grin and bear. One of the many quirks that grow on you. And, of course, try and stay away from the highways!

As a transit camping – this is perfectly agreeable for a one-night-stopper (that’s a new word… look it up)! I would suggest it is not very far from the highway and yet it is a quiet setting ( just the road on the dyke next to the river giving some background noise).