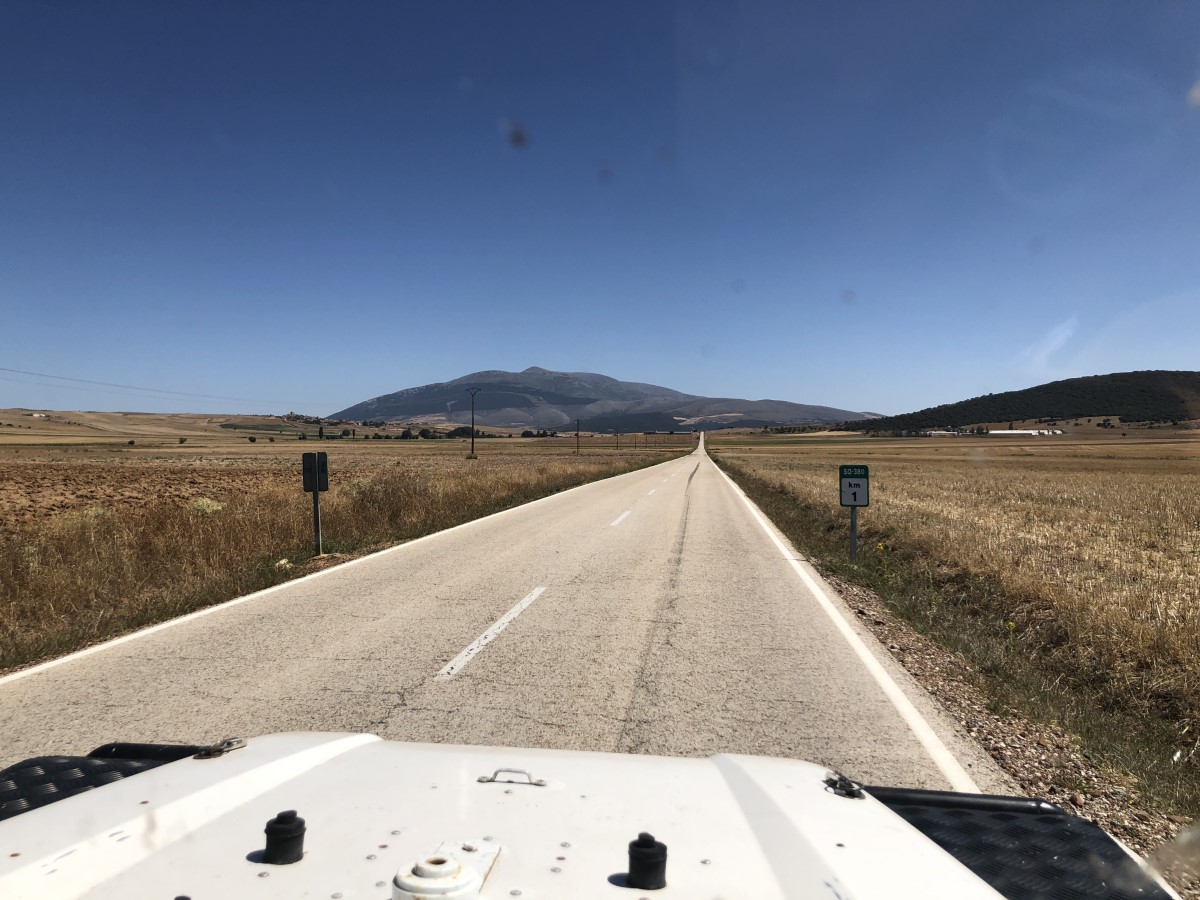 And it is hot! And dusty. And flat. Endlessly flat. How we somehow manage to follow the ‘service’ roads for the solar and wind farms, I don’t know. But they are pretty remote and there are a lot of them. There’s nobody around and it’s fantastic to experience just how big Spain is!

Once again, there is something to be said for ‘avoiding motorways’ with your navigation app of choice. This gives you a broader view of the countryside, approaching it from a different angle – and direction! And it speaks volumes for the blind trust you place in these devices to deliver you to your destination.

From the solitary plains where there are a surprising number of wind turbines and solar parks on a scale you don’t often see, we pass through a larger town where the urban sprawl is a stark contrast. Gimme them plains any day of the week…

Is still in Portugal – just – despite our best efforts to cross the border. We decamped from Lima Escape after what seemed like a very long (and cool) time (we had been there for eleven days!) and headed east towards Spain.

We came through the Penéda Geres National Park and followed some pretty twisty roads along the rivers, with no real destination in mind. Just an enjoyment of being on the road. And the remote area is simply amazing!

We tried for Spain, we really did. But ultimately made for refuge in Portugal. Mostly because of the extraordinarily steep roads around here. They build ’em straight up and straight down off of the mountain. No quarter given…

And this was a very tall order for the old Landy! A a certain point the transmission tunnel was so hot that you could have made a three-course meal on there… So it was time to call a halt on proceedings and camp for the night.

The village of Mogadouro seems to be at the summit of ALL the hillsides in the area. We just kept gaining altitude, and eventually seem to enter the village from the tradesman’s entrance – a small dirt road that eventually became paved and led to a cobble-stoned road down to the campsite.

When we left the next morning we passed through the town itself, which was far bigger than we had imagined…

The guard at the gate is very helpful and aims his temperature ‘gun’ at Vic’s forehead, nodding in approval. We are assigned a pitch and make camp for the night, electing to sleep in the car since we will be moving on in the morning.

We have access to the public pool next door. There are clean and neat ablution blocks. The pitches are big enough – and each second pitch was cordoned off because of the situation – making for a bit of extra privacy. Even an electricity hookup was thrown into the deal.

The best part is when Vic presents the bill for the evening. Just €10.33 for the night including electricity! I think I have found my new favourite spot! This kind of value is off the charts. This is what you normally pay for some campervan sites (with no amenities besides a tap and a drain).

The night was very hot with not a hint of wind and very muggy, reminding us that it is still summer! The rear door was left open for some ventilation but this proved fruitless. I think we need to find a portable air conditioning unit somewhere!

Yes, I know that Tordesillas is just a couple of hours from Mogadouro. But we’re avoiding the main highways and our meeting in Toulon is a couple of weeks away, so there’s no particular hurry.

It is a small reminder of why we are on the road, to begin with. The original plan is to try and make a few miles per day and then find a place to camp. Whatever you see and pass on the way is done in a far more chilled way. In fact, there is no better way to do this is than by Land Rover. Fast travel is simply not an option.

…is on the Douro river (sound familiar?) on the opposite side to the town of Tordesillas. The first thing that gets you when you arrive at the campsite is the dust. And a not-insignificant amount of noise from people talking.

There are some trees, but no grass on the site. And we end up on a pitch right next to the entrance. No other pitches were available – apparently – so, this meant a significant amount of dust and dryness. The entrance boom was doing overtime lifting and closing as another campervan passed through.

There is a restaurant on site that has quite a large clientele from Tordesillas across the river. And they like to party late in Spain. At least until midnight every night. So you need to readjust your mental clock a little bit.

The best part of this camping is the pool area. It has the softest water ever and – when we were there – it wasn’t too busy. We spent quite some time there cooling off in the heat and trying to get the dust out of everywhere – especially the eyes. This is a real bonus with nice green grass to relax on. It was still mighty hot at midday!

We spent a couple of days here just chilling and taking advantage of the good 4G connection to catch up on some work. Naturally, I would recommend a pitch further from the entrance since the dust is at level ten.

You get a good ablution block and some tall hedges for a hint of privacy – and that pool is EPIC!

However, it is time to move on. Further east across those expansive plains of Spain.

We stop off in the small village of Vera de Moncayo and end up waiting in the parking lot until the siesta is over! It is a municipal site and the town itself is quite remote. The permanent wooden cabins are mostly occupied by Spanish people but out the back, the is a large open section with one solitary campervan, so we pitch our tent there.

What IS surprising is that this camping is, in effect, a dustbowl offering not much in the form of comfort. This isn’t something we look for anyway but the fact that we are asked to pay €29 for this tells me a couple of things.

Either they are desperate for some cash as there aren’t many campers around. Or they don’t appreciate foreign tourists and it is a blatant attempt to discourage occupancy. Mmmm…

The bonus IS that there is nobody around. And that the 4G connection is blazing fast. Which is exactly what we need. It is also very hot! We elect to stay another day…

We are not there yet… And Spain is far bigger than you might imagine. We point east once again and head towards France. The plan of attack is to head in the direction of Perpignan and then follow the coast to Saint Tropez. But first, we had to trade in the flatlands and conquer the mighty Pyrenees mountains!