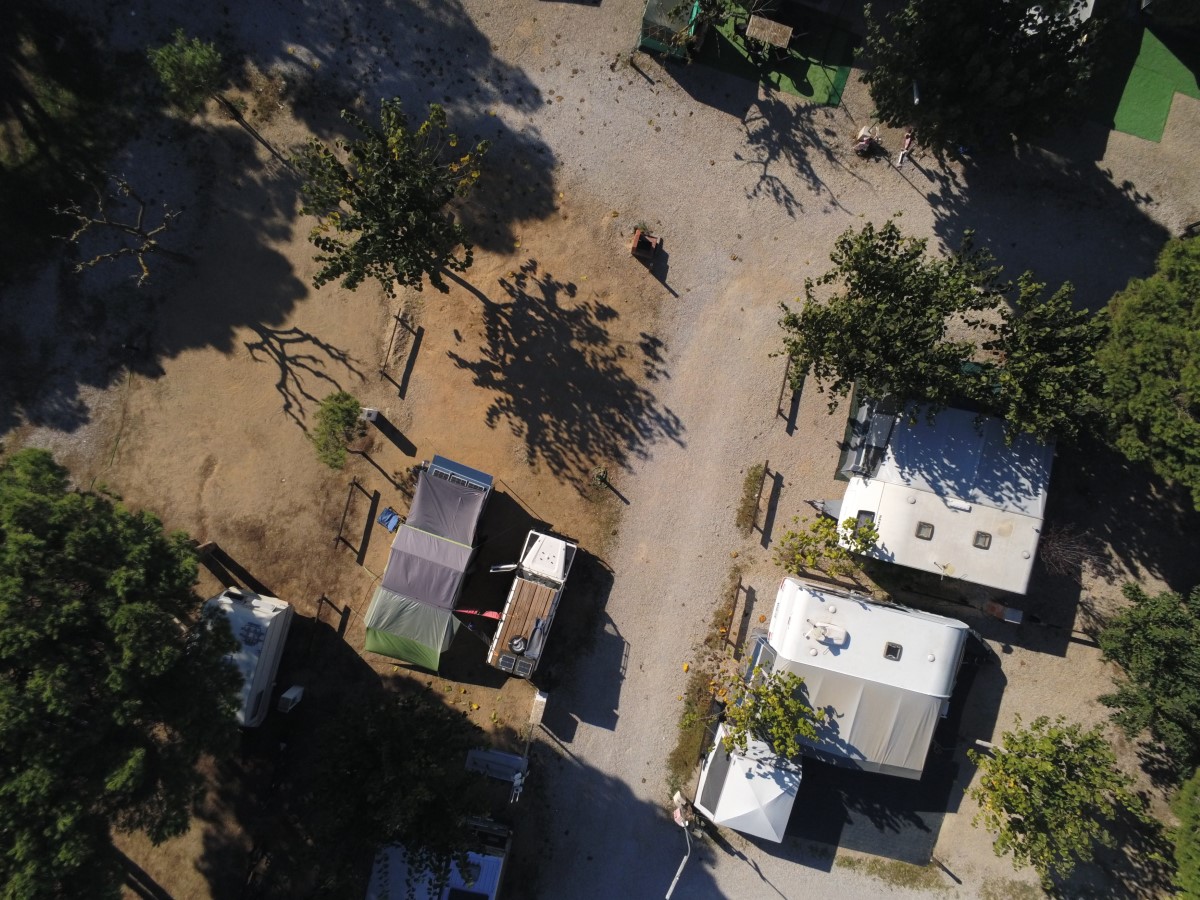 And that is all you really need to know. However, I suspect it is only during the week and they suspend service on the weekends. Camping Estrella de Mar is situated south of Barcelona – not very far from the airport. If we had done our homework we would have figured it out… But hey, we’re out here on the ground doing the research – so you don’t have to!

We arrived at the ‘Starfish’ campsite on a Saturday afternoon and the place was buzzing. Two uniformed, stern-looking gentlemen manned the gate and eventually, we followed one of them on his bicycle to show us our pitch. This place is pretty big and has quite a good amount of shade from the tall trees and the smaller mulberry trees being pruned at this time.

Our assigned pitch was in the camper/tent area under some pine trees. Gravel underfoot and an open-air feel. The Oztent went up and we set up camp for what would be a week or so.

All around us, there were mini parties going on. Kids running around playing. Smoky barbecues give off hints of grilled food. Families gathered for their meal. A serious game of cards. Some funky Spanish music… It was a pretty good vibe going on around us.

While we were sitting down to watch the neighbours all have their parties it became clear that most of the caravans were ‘dug in’ and were a permanent fixture. I can’t recall having seen caravans with a double front tent? But just being privy to what seemed like a local custom, despite some strange looks (perhaps a bit too foreign?), was rather nice.

The restaurant was doing good business and there were some dancing classes (looked like a salsa?) on offer. Care to join in? Even the racket courts were being well-used. The only omission was that the swimming pool seemed to be closed. Quite a change from the slow vibe going on at Camping Les Medes…

The campsite is about 800 metres from the Playa de Castelldefels. This beach is really long stretching all the way from Barcelona to Puerta Ginesta. And at this time of year it is fairly deserted and a chill place to hang out.

There is a sailing school for catamarans and smaller boats, a couple of restaurants and cafés strategically scattered along the seafront boulevard and not much else really in the form of built-up centres. Just some housing fronting onto the beach. This seems to be one of the lesser-developed places on the Costa Dorado despite being in close proximity to Barcelona. It’s a good place for a quick swim or a long stroll during the sunset.

I Can’t Hear You

The Sunday brought a slow start for all revellers after a pretty good session spent catching up with family and friends. We thought this might be the norm but were slightly surprised that some people started packing away their things. The barbecue was secured, tables folded away and bags of clothing loaded into the car. Farewells were shouted across the lots and around sundown we were suddenly in a ghost town…

Seemingly suddenly there was nobody around except for the half a dozen wayward campervans and a trio of tents on the little field next to the ablution block. Quite the contrast. No more charcoal smoke, no more chattering conversations, no more lilting Spanish tunes. We spent a quiet night.

The next morning we arose to Barcelona’s call. Flight 000 from who-knows-where was attempting to land on top of the tent!

Looking up, I can tell you it was a 737 with landing gear and flaps extended and engines revving up and down in their attempt to stay on the glideslope. I could almost make out the serial number of the plane! I can tell you that Vueling is doing good business! But this may have something to do with the fact that they are based in Barcelona…

Yes. This continued for about an hour with a newcomer every three minutes. Then a lull – which was false – led you to believe they were done for the day. But then another low-cost carrier made its presence loudly known before briefly passing over the opening in the trees above.

Not particularly conducive to a number of Zoom calls being done. I mean, I can say with authority that an Airbus dominates on the microphone and you have no hope of competing…

Fortunately, this cacophony of sound was not prevalent during the whole day. An hour or two of landings and then a break. And then another couple of hours… This sounds okay – but let me tell you that the sound of an aeroplane engine is not the most pleasant at all. We were glad when they changed runways on the following day! And then not-so-glad when 07R was back in use on Wednesday morning.

A bit of a shower

We had mentally prepared ourselves for an early(ish) departure towards destinations yet to be determined further south. It was the weekend again, and the locals had descended onto the camp for a good ol’ fiesta. Things were going well, and we were trying to keep up with festivities, even deploying our little Bose speaker to the cause and busting out some moves in our tent.

But then the heavens opened up. And it wasn’t a drizzle! Heavy rain pelted the camp for upwards of a couple of hours. Eventually, we even needed to secure the tent itself – having been blown half-down in the gusty wind. Water-logged sand underfoot and a dreary and damp spotlit darkness did nothing for the mood at three a.m.

Thumbs Up or Down

Normally this would be an easy answer. You get a feel for a place fairly quickly and then it develops, or evolves, into something positive or negative during your stay. As I mentioned earlier I suspect that they suspend flights on the weekend – or use another runway. Therefore, if you focus only on the aeroplane noise (which the campsite is well aware of in taking payment upfront, hehe) then you may be disappointed with your complete experience.

What I did enjoy was seeing the local Spanish people hanging out together at their ‘holiday/weekend place’. They are a jolly lot in my opinion, with much laughter to be had and a generally pleasant joie de vivre.

The contrast with the midweek peace when the campsite was a veritable ghost town was quite noticeable. It is a good way to experience both sides – some hustle and bustle and then some chill. The only price you have to pay is trying to be heard over the din of a Rolls Royce engine a couple of hours a day…