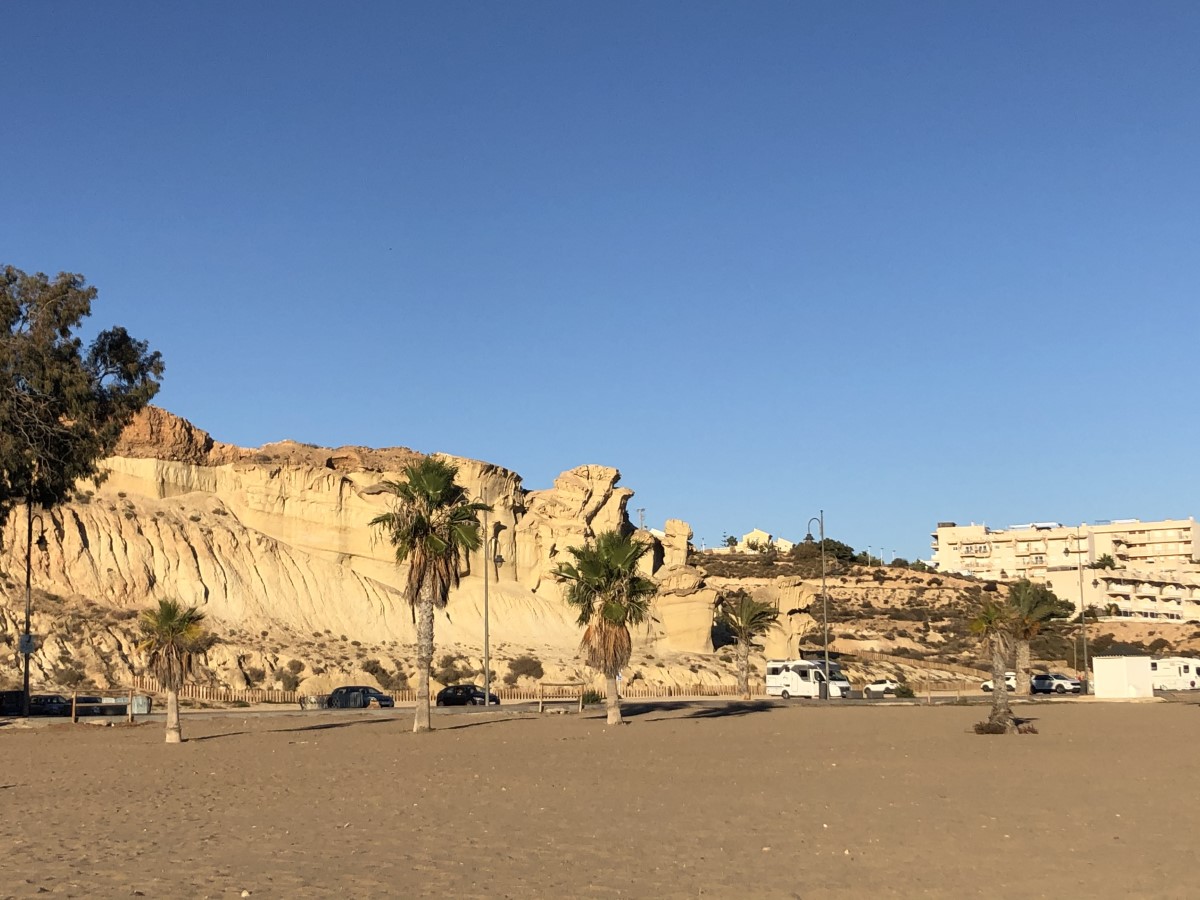 That is a LOT of campervans – with a couple of caravans here and there. It is November which means we are not exactly in summer mode. Nor is it the holiday season. And most of these people here are not Spanish. Perhaps unsurprisingly we spy Germans, Dutch, Austrians, French, Belgian, English… Even a stray Luxembourgois…

The contrast couldn’t be greater with the small site last night in Xeraco. The only commonality is that the pitches are gravel and are not lined by hedges. Well, in this case, a couple of low ones spread about.

The campers are lined up like on a parking lot and they’ve tried to add some colour in the form of palm trees. However, it will never have much charm because of the large white boxes parked about. This isn’t one of those characterful camps in the middle of nature overlooking a forest with a stream tricking nearby.

A Nice drive to get here

The route was from Gandia to somewhere south of Cartagena and took about three or four hours. It was a nice relaxing drive that took in some coastal roads as well as a remote section in the hills before we were directed past the iconic views of Benidorm. Luckily we didn’t go through the town centre, although we did end up in the middle of Alicante, which is quite big and similar to Valencia.

There is also a road that goes right through the salt flats, with open water-logged fields on either side. This brought up a memory of our trip through the Makgadigadi plains in Botswana (which is far more remote).

The road hugs the coastline once more before cutting inland around Cartagena – a name that conjures up images of a shady movie set in Colombia involving illicit dealings in powder… Not far beyond Cartagena, we land at the entrance to the campsite at Bolnuevo.

So what’s the appeal?

Quite a few of these campervans are here for the long haul. To stay for the entire winter. Simply put Spain has all the key ingredients: warm weather, sunshine, blue skies, beaches, warm seawater.

And this is during the winter! Not to forget good paella, chorizo and quite a bit friendlier on the wallet. You can’t exactly find these things in Northern Europe if that is what floats your boat. And that is in summer!

So it is completely understandable then, that there are these ‘grey-roamers’ that choose to spend quite a significant amount of time further south. And we are quite far south at this point at around 800 kilometres from the French border. I may be exaggerating when I say that every hundred kilometres further south equal one C° warmer, but it certainly does feel that way – at this point in time.

Once the shock of all these white mobile abodes has worn off we are fortunate enough to find a pitch near the edge of the property but at the furthest point from the sea. This means a bit of a trek for a swim or a sundowner as there isn’t much of a view at all from here. You just look onto each other’s campervan…

It is impressive that all the pitches are kept clean and neat. All you see is some laundry drying or a stray beach towel. They do take some pride in their surroundings…

A Beach, of course

The plus side is that the campsite fronts onto the beach. The mesh fence surrounding the camp does, however, take away some of the glamour and it is a fair bit of a hike from our pitch. But the beach itself is very wide and reminds us a bit of Bondi (from what we saw on TV) and I was expecting a camera team from Baywatch to appear any minute!

The sand is nice and soft and the small, rolling waves pelt you with hidden pebbles as they wash over your feet. You can swim here, but the lifeguard has headed south (for winter?).

From the beach, you can see the backdrop of some hills sloping down onto the town of Bolnuevo. And the added bonus of facing due south is we have some spectacular sunsets, just like at Xeraco (although that particular beach faces east no less impressive).

Luckily for us, I suppose, we have a lot of work to get through, so we are not much put out by the lack of entertaining views. And actually use this to our advantage to be productive. It is fairly quiet (only some conversation from neighbouring campers) which does help you concentrate.

Surprisingly enough you do get a certain amount of privacy – after the rituality of all the morning greetings in different languages. And – if you hadn’t figured it out yet – the fact that most of these folks are elderly (perhaps pensioners) has the added benefit of a lower noise level in itself.

Is THIS the campsite for you?

Now, of course, to the burning question. Is it worth coming here? Well, that will depend on what you’re looking for. The coast is attractive around here (not too built-up) and the town has some attractions in the form of the beach, coastline, hills and some interesting rock formations.

There are some comforts in the form of slick ablution blocks, restaurant, swimming pool, bar and electricity, water and drainage at each pitch. Even an aerobics lesson on the tennis court twice a week, oh yes! A bit like a mini-community, and they’re all in a generally good mood!

However, stop to think about who these guys are? Yes, they’re greying pensioners. Maybe not as cool or as sophisticated as you are anymore. Maybe there isn’t as much action around here as Ibiza (or Benidorm – lol) But they ARE out here living the roaming life. Taking it all in. Chilling. Being mobile. Can’t help but feel some respect for that.