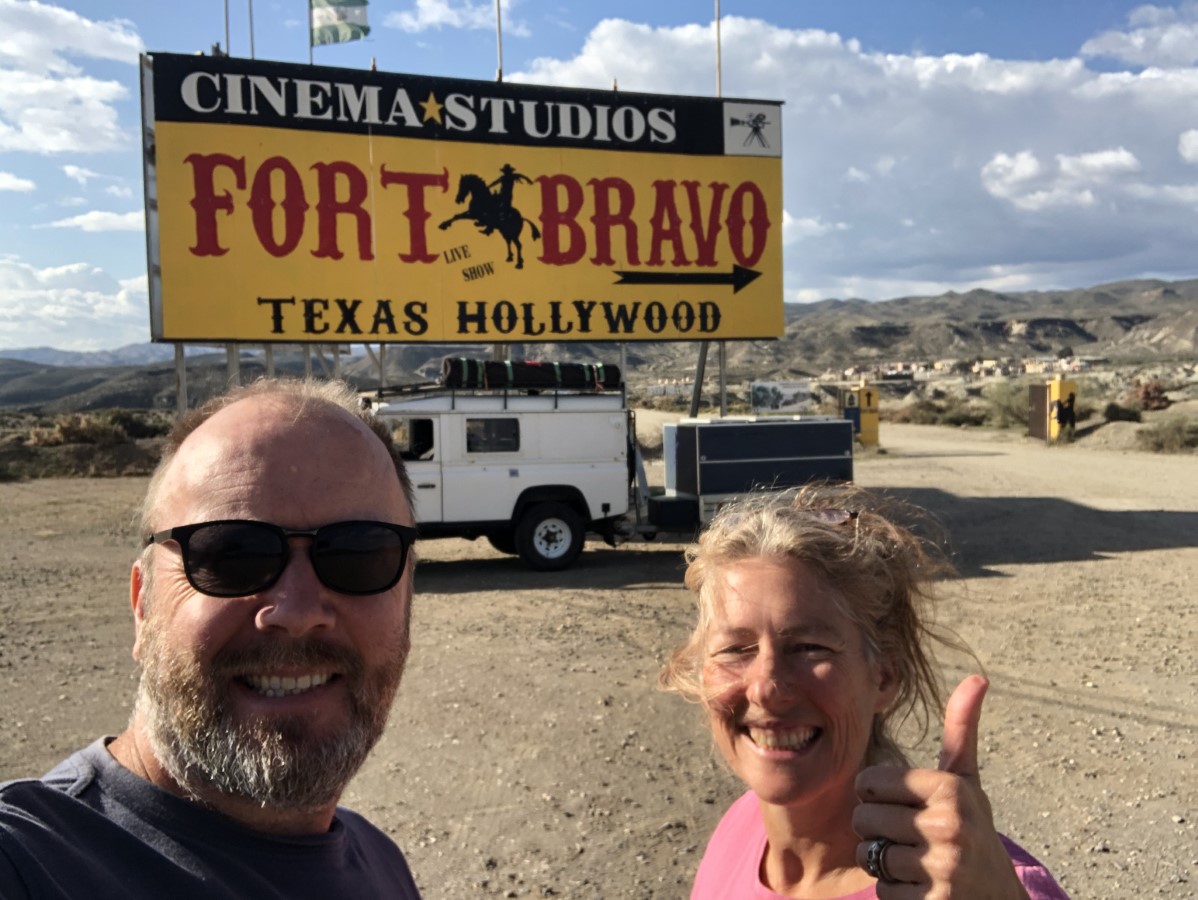 We have just recently come over the spectacular Pyrenees for the first time and I felt it was better than the Alps (fantastic). We have also seen some pretty spectacular beaches and those endlessly long open plains in Spain. We have crisscrossed France many times (unintended sometimes), as well as the Alps and toured the northern coast of Spain.

So in the respect of having travelled thousands of kilometres, I felt that I have experienced the best of what western Europe has to offer. Until you get to Andalusia and the southern part of the Sierra Nevada! A-348, N-340A & N323a – write them down and get down here if you can. Just phenomenal!

We departed from our undercover stint on Mazarron that morning with the heady goal of trying to reach Motril that evening. A grand total of 300 kilometres! Would we make it? It may not sound like much but we are continually trying to avoid the highways as much as possible. Obviously, we all know that the toll road is not the preferred habitat of the Defender – but also you get more of a flavour of the countryside by following the lesser-known routes. An added bonus is there is far less traffic on the roads…

Therefore we find ourselves on the N-340(a) heading south crisscrossing over the AP-7. This road pretty much follows the toll road, but where the highway is fairly straight, our little road is a lot more of a winding affair (more of which later).

It follows the contours of the hillsides and passes through the characterful villages. We spy patron-filled café and bar terraces taking in some sun while bemusedly watching the world go by.

Tractors parked by the roadside, ready for next Monday morning. Dried up river beds and wide flood channels. Acres of olive trees being hand (and machine) picked. Green hillsides and dry, bare stretches of land. It certainly is diverse.

This is also where we are stopped by Guardia Civil Trafico. Flagged to a stop at a Repsol station in the middle of nowhere. We were also rolling solo at the time in the sparse traffic, so perhaps they needed something to do?

Driving license and roadworthy disc are checked and after confirming we are on holiday and not Spanish residents they wave us on our way again. Seemed like a random check on the local traffic. Oh, and he didn’t smile at all. This is the first time we have been pulled over since we left Cotignac six months ago…

We went to visit Clint Eastwood – but he wasn’t there. Yeah, very funny, I hear you say, but this is not in jest. This was the filming location for many a spaghetti western back in the day, for example, ‘A Fistful of Dollars’.

We visited this set two years ago during our drive from France to Gibraltar for an English breakfast and we passed through the Sierra Nevada. It was built in the 60s and is a town with empty cowboy-style buildings that you can walk around and enter. They are looking a little tired, after 6 decades, but it is impressive how Hollywood can make these sets come alive on screen.

There is a canteen/bar and restaurant but the big drawcard is the bank robbery and shoot out. It’s a real hoot, with horses and guns firing and good fun to watch in a strangely camp kind of way. The surrounding rocky desert makes it seem as if we really are in a tumbleweed-strewn one-horse town in New Mexico.

Or perhaps the injuns are tracking us through a dusty valley in Arizona after we were forced to put down one of our lame horses and are slowly dying of heat exhaustion after the water ran out three days ago.

We need Lee van Cleef to ride in flamboyantly brandishing a couple of Colt Peacemakers to save our asses! Our previous visit is immortalised in the video below

It may look like just a number – but this is actually a secret codeword. A code that stands for dramatically awesome and that is not an overstatement. This road runs along the southern part of the Sierra Nevada with views that grow ever more spectacular with each corner.

Rolling hills give way to starkly barren peaks that jut up in the distance in shades of brown and beige. The road we are travelling on rises and falls in elevation pretty severely at times. Kilometres long ascents followed by long and winding descents towards the valley below. The road is thankfully not too busy as we heatedly labour up the inclines and around a hill to another striking view towards the horizon. Nature really has done an incredible job out here!

Branching off from the grandeur that is the A-348 is a terrifically windy little road that follows the Guadalfeo river. This road hugs the side of a rather steep mountainside with a precipitous drop-off towards the canyon below.

Nature doesn’t really do things in a straight line so – on the descending gradient, there were countless corners at rather sharp angles. The brakes and the engine were deployed to an alarming degree in order to navigate the sharp turns. All the while having a half-ton trailer trying to push you over the edge. I hadn’t considered just how high we had come in altitude to have such a long descent.

About twenty kilometres later we finally made it to Presa de Rules – the dam wall of the Guadlafeo reservoir. We pulled over for a quick photo but mostly to cool the steaming brakes and try and absorb and reflect, on the last couple of hours…

This road makes its way down to Motril on the coast and essentially follows the Guadalfeo river through a deep gorge with towering mountains on each side. For quite a number of kilometres, you spend quite a while looking up! The hillsides are very steep and very high.

Progress is a lot easier now that the road has levelled off and the river just meanders its way along. Today has most definitely been some of the most dramatic countrysides we have seen. It has been a long day behind the wheel, and we have taken our time as well. The roads were quite slippery in the rainfall, especially climbing and descending from inland to the coast. The sun is just starting to glow red as we pull into Motril and follow the road along the beachfront to camping Playa de Poniente…