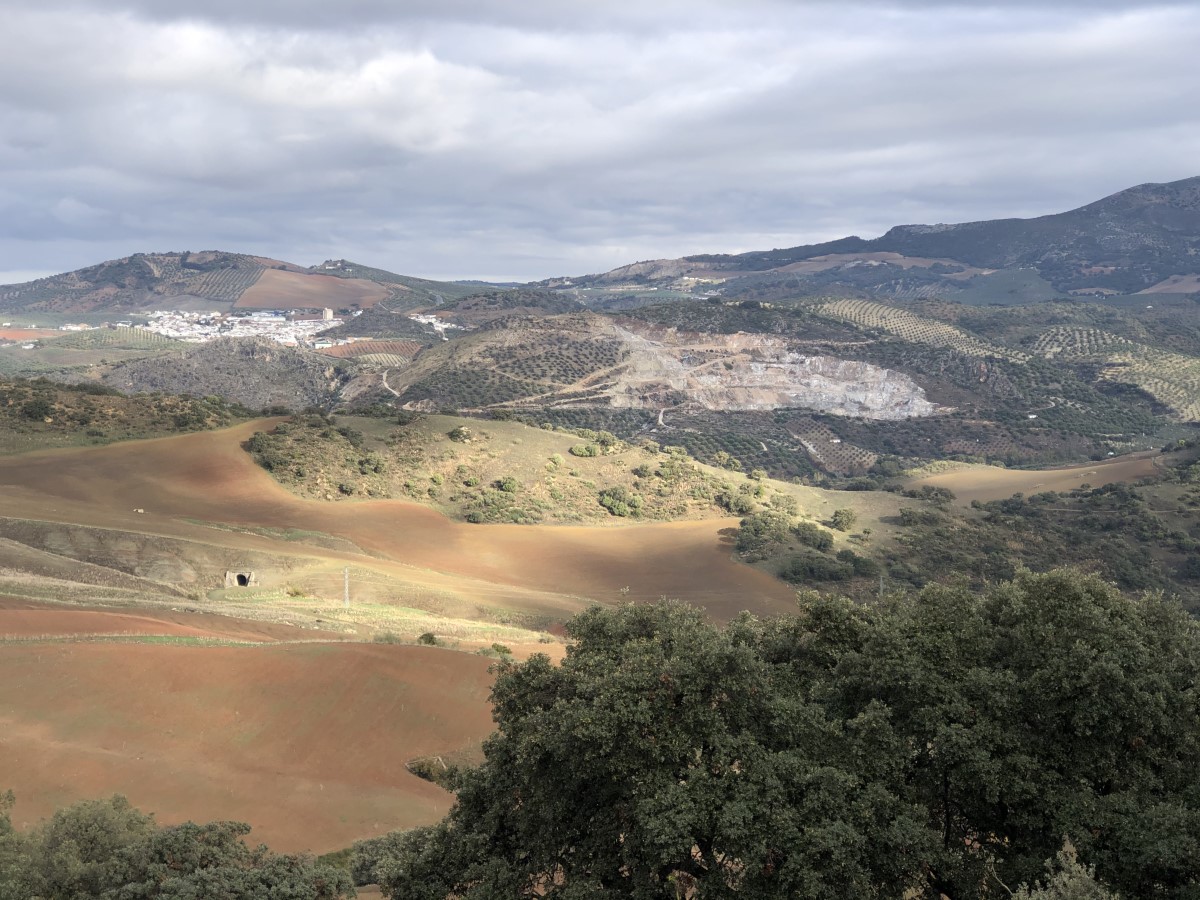 …and ‘millions’ is not an exaggeration, as we’ll see later. However, our day starts off in the rain and getting lost in the plantations. The rain continues for most of the day until we reach the highlands of the Cordilleras Béticas when the sun peaks through the clouds.

This one is situated south of Motril along the Playa del Poniente across the road from the similarly-named pebble beach. It has an old-school feel to it that seems like it has been here for quite some time. The pitches are gravel and not very big with large trees giving plenty of shade. And mostly protection from the strong winds!

It makes for quite a contrast from our stay at Playa de Mazarron. Mazarron was set for campervans with open pitches and was very organised. This one is a lot cosier in feel and with the autumnal leaves falling it had an unkempt feel. Not for lack of effort by the staff who were on the ball keeping the ablution blocks clean and trying gamely to stay on top of the leaves.

There’s a restaurant out front (pretty much the norm) and one of the best-stocked shops on a campsite we have come across so far… Here we also have quite a few permanent pitches (some caravans looked abandoned since summer) but there was no problem securing a pitch even if the pitches are only about 50m².

A peculiarity is that we are obliged to wear our flip-flops IN the shower. At first, I thought this might be for hygiene reasons, but further examination reveals that I suspect that the contractor used very slippery tiles…

The beach is very wide and is reached via a big parking lot lined with palm trees. The tidal range was such that the whole beach disappeared during a storm and we were thankful for all the trees protecting us from the wind!

Like most campsites, it grows on you and we spent a good week here. 4G was good and we paid about 18€ a night incl. electricity. The town centre is a couple of kilometres away with larger stores. I can recommend the Alcampo for well-priced diesel!

Lost in the Plantations

We leave Motril on a rainy morning with a destination a little inland this time. And promptly get lost in the plantations. This isn’t something you normally see up close unless you are a local, but interesting nonetheless.

As we meander trying to find our way out we catch a view of the hundreds of white houses on the hillsides of Motril. This is quite a contrast to the little tracks running through the plantations flanked by some half-built apartments under construction.

We finally manage to get into Motril itself and then head along the coastal road (N-340) towards Malaga where we’ll veer off inland at Torre del Mar. Once again, I have to commend the Spanish road builders for hugging the coast so faithfully. But on the flip side, some of the civil engineerings makes no sense at all, with crazy intersections that make for a lot of confusion.

Due to the rain, slippery roads make for sedate progress, but that’s no hardship with the Med right on our left shoulder and forested hills to our right. At this time of year, there isn’t very much tourist traffic, thankfully, so we can enjoy the views from the Defender windscreen.

Winding our way from the seafront the going gets tougher as the roads get steeper. We head towards Antequera via a small town called Villanueva de la Concepcion. This town is where the roadbuilders outdid themselves with a tiny road heading straight up into the mountains. If I had to hazard a guess it would be between 10-15% gradient. We spent all of our climbs up here in second gear…

But it was worth it! The A-7075 follows the ridgeline escarpment offering stunning views of the valley below and a dramatic mountainside to the left. This was a beautiful reminder of our drive through Wicklow, Ireland. It later crosses through the pass and loops down through a natural park area. A good place to go hiking or spend the day at a picnic site.

From the large town of Antequera, we follow the A-384 towards Jerez de la Frontera across thankfully fairly level hillsides that are lined with endless olive groves. More than thirty kilometres of farms stretching to the horizon might give an idea of how big this industry is.

Large tracts of land are farmed with olive trees in varying stages of growth. More land is ploughed and fallow, possibly ready for next year. We pass solar farms of a similar scale to those up north near Valladolid. There is a lot going on here and the landscape in between the farmed land is incredible. It varies from dry, ploughed emptiness to green forests and then to precisely straight rows of olives. Tractors are on the road, perhaps due to this being the harvest season.

Near Olvera are lovely high, wild forested mountains and hills. Yet even here any area that can be accessed by a tractor is turned into arable land for the olives. It is estimated that there are over two million trees in this region. And every town has a cooperative with many pickups parked in the groves filling their trailers.

This campsite lies just before the town of Olvera and is a bit of a surprise. A bare hillside with a palm-tree-lined driveway heading straight up and newly planted saplings to cover the sand. This bodes well.

Until we get to the top and find it to be a rocky outcrop devoid of greenery. The ground is stony, rocky, sandy and hard. And frankly not very inviting. Despite the efforts to plant some trees and shrubs, it looks bleak and uninviting.

But we need a pitch for the night and, after circling the rather large and spaciously laid out hilltop, pick a site that offers – to our mind – the best wind protection. Although this isn’t saying much…

But, like most campsites we have visited, it grows on you.

The beauty that seduced me here was partly that we were not in the village itself but situated more remotely. And partly because there were perhaps a dozen others scattered over the site, so it felt very calm and restful. But mostly because of the incredible views to be had all around. And the silence apart from a couple of birds chirping…

There is nothing better than your frosty breath in the early morning sunlight with a warm, steaming cup of tea at the start of a chilly day looking out over the mountains… I wished we could stay a little longer, but we’ll be back! But now we head ever further west, back towards the coast!