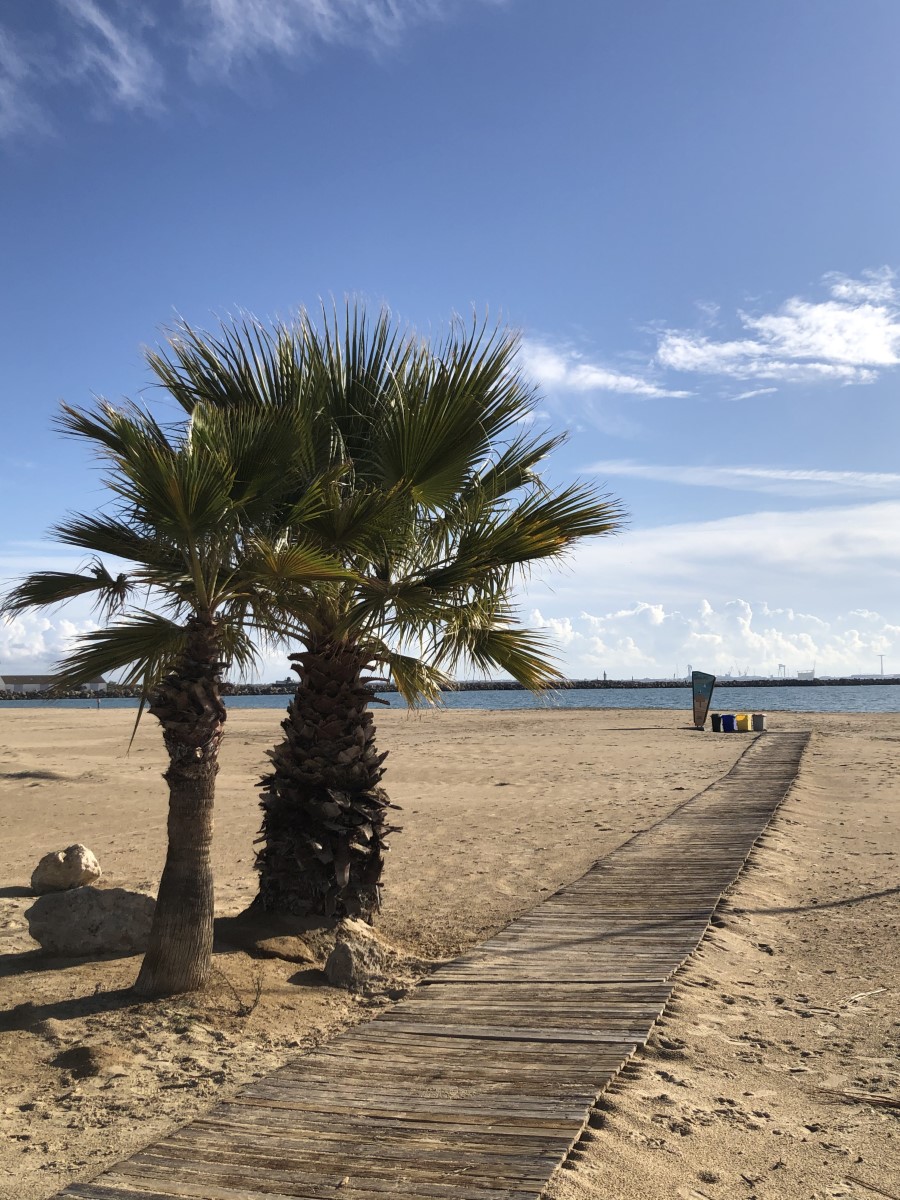 After a really nice (if chilly and wet) evening and a fabulous morning) on Camping Pueblo Blanco, which is just north of Ronda, we needed to push on, further west.

Just north of the Parque Natural Sierra de Grazalema are scenic views equally as amazing as it sounds. Mountains and steep, forested hillsides line the road and, mercifully for the Landy, the road descends towards the lower regions of the coast. Which has benefits for the old Defender in that we can cruise along instead of beating the engine on the inclines we experienced yesterday.

This region is just a couple of hours north of Gibraltar with numerous greenhouses – many acres in size and covered in plastic. Long tracts of land have been ploughed for miles all the way to the horizon over the flowing hillsides. What they are attempting to grow here is cause for speculation. The number one guess is potatoes, followed by perhaps maize.

Cadiz seems to be situated on a (semi) island centred around a port and a congested city. It is reached by a rather good looking bridge, but there are no campsites. It seems to be completely built-up except for a tract of beachfront.

We divert to the neighbouring town of El Puerto de Santa María. We are somehow routed through the less postcard-worthy areas and it is still a shock to be confronted by busy city life and the many people. It is a big contrast to the small rural areas and quiet (time of year) campsites.

Playa de La Puntilla is a wide beach looking out over the Cadiz bridge. Just across the road is the campsite Las Dunas.

I have mixed feelings here as – sometimes – the warmth of the reception is often connected to your enjoyment. And we haven’t had such a cold reception since we’ve been on the road! Which is getting on towards three dozen campsites in the last six months. We were met with a complete lack of interest. Aloofness and arrogance predominate.

If you’re having a bad day, I am pretty laid back and I can get on board with that. But on the three different occasions, in as many days, all three receptionists displayed a similar attitude.

This leads me to think that they either need a little more smile training or perhaps find another line of work. Having been in the hospitality industry I can speak to the fact that you are in the service of the customer and need to be on point ALL the time. It comes with the job.

If you think I am being a little harsh then consider that we are here helping to pay their salary (yes, let me play that card). And let’s not forget how much a (negative) review can do for a destination on social media. Sadly, I expected more professionalism but this did not cut the mustard, man…

So, anyway, rant over

I can tell you that the pitches are damp and a little muddy. No grass here. And we have a large tree blocking most of our sun during the day. The sun is your friend at this time of year, as well as the laundry load we were doing…

There are no hedges, so everything is open and mainly geared towards campervans.

Rain and dampness pervade and you take every opportunity to grab some sunshine. Next door is a large sporting ground that seems to have a permanent football match every day for kids and players of all ages. We could hear the ref’s whistle, some shouting and the thud of a soccer ball – the sounds of easy-going civilisation

The ablutions are quite new, sizeable enough and well-cleaned every day. The only traffic jam is the queue for the washing machines. There are only two of them and a lady lost €5 by putting the money into the (badly signposted) dryer slot by mistake.

But we managed to get a load of washing drying off the Landy and some guy ropes, looking like a cheap motel balcony. Then again, this hardly raises an eyebrow on a campsite. By nightfall, camp is clear and everyone prepped for the chilly night.

We had a lot of work to do so we opted to stay a couple of extra nights but – as alluded to earlier – the cold reception did not inspire us to stay any longer.

It’s a well-equipped campsite, roomy pitches and easy access to the beach, but a little lacking in character (like the receptionists). I don’t know who the intended market is, is it campervans (which means no grass either), one-nighters, weekenders or long-termers? I didn’t feel the same charm as at Mazarron (which is pretty much the same in spirit but much more chill) but maybe I was the one having an ‘off’ day. Besides, the plan is still to get to Portugal. Onwards to the west!