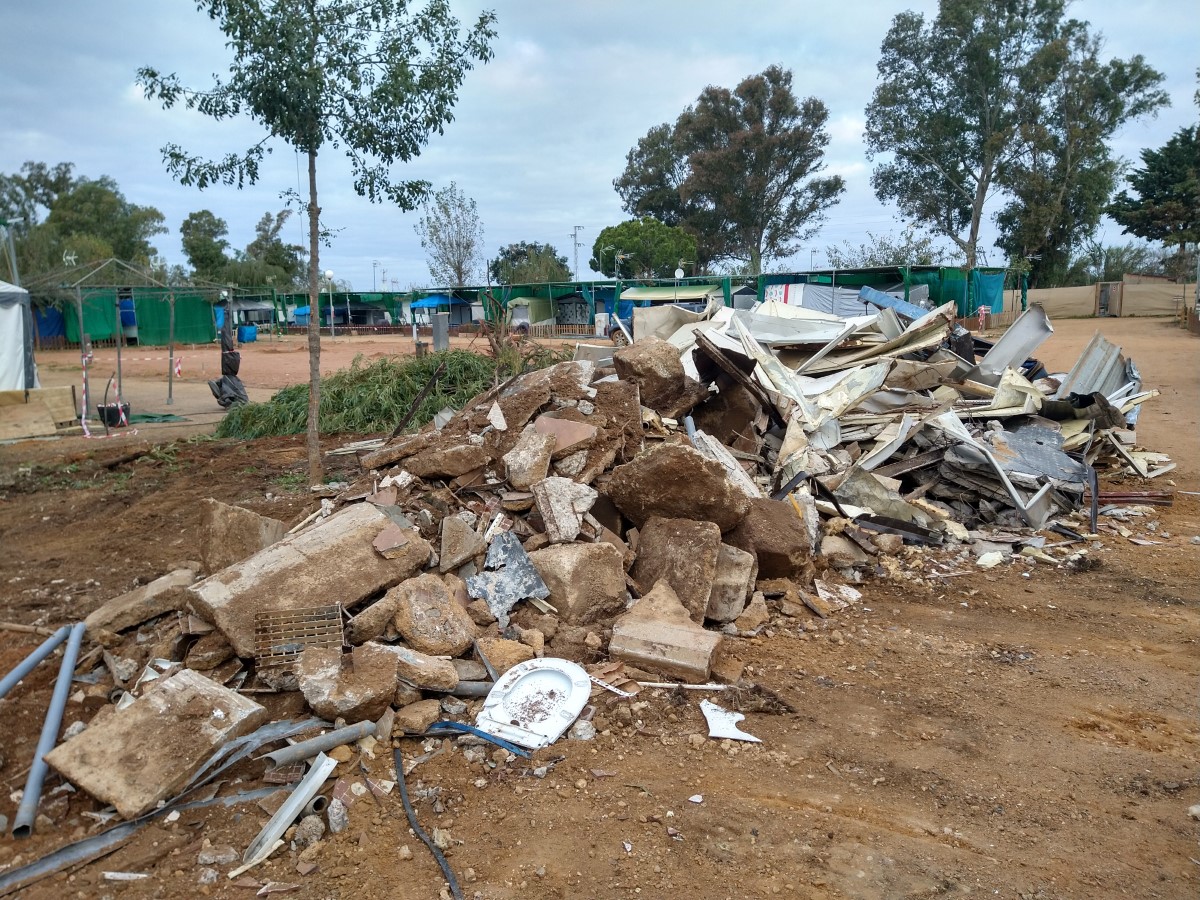 It’s rather chilly and damp until midday and the campsite is muddy and half under construction. But the quiet surroundings and a fantastic area within a five-minute stroll of a deserted beach has us literally in its grasp.

Yes, first impressions do not appeal. What is sold on their website as a rather cool and funky site looks dilapidated and tired when we first enter. Let me try and paint a picture.

Muddy areas are cordoned off with construction tape. Two builders ferry a trailer with wheelbarrows filled with concrete from an area near the back towards a row of mobile homes that they seem to be setting up. Abandoned and collapsing ablution blocks sit awaiting their demise.

The carwash area has a high-pressure installation that is falling apart. Their talked-up globe ‘glamping’ rig hangs dejectedly, moss and leaves clinging to it. The permanent caravans look a little tired under the shade netting. Still more mud underfoot. It crunches as you walk over it and never seems to dry.

But there are signs of renovation. The new(er) ablution building is well-finished (outside) and offers warm water showers! There is a nice restaurant at the entrance and a little supermarket that is closed for winter. The staff are welcoming, and so are the dozen or so other long-termers parked here in their campervans. The vibe is 200% better than at Cadiz.

How we got here

There’s a river that heads inland just west of Cadiz. It is called the Guadalquivir and has the Parque Nacional de Doñana just west of that. Great to know, you might think, but there is no way to cross this river, nor the national park itself. The nearest bridge lies up north at Seville. A 100-kilometre detour that effectively doubles our driving distance for the day. You could get upset by this – or agree that it is a good thing!

There is not much to see around here, just more of the same ploughed land that stretches to the horizon in every direction.

Progress is slow around Seville. A lot of traffic and a reminder that it is the biggest city in the region. If it wasn’t for that bridge we would’ve given it a wide berth. After having navigated the busy and confusing roads we elect for the highway for an hour or two at a steady (heady) 90km/h. Bizarrely we meet a roaming French couple at a service station who are on holiday with their parrot!

So many clichés, but here in this place they are no exaggeration. A short walk through the pine and bluegum trees across the main road lies Playa de (Taray) Redondela. The walkway ends on the beach sand and a further fifty metres straight ahead are the chilly waters of the Atlantic.

As you head to the water, look to the right and the beach stretches for about three or four kilometres to the fishing port of Isla Cristina. There is nothing but beach sand between you and the port entrance that you can just make out in the distance. A couple of chiringuitos are perched just behind the dunes, now deserted but surely buzzing during the summer.

Look to the left and a similar view unfolds. Only a couple of walkers can be seen stretching their legs along with their dogs playing in the sand.

Vic braves the Atlantic waters for a cold swim. Some passersby are dumbfounded and shake their heads in disbelief. The water is chilly at around 12 degrees but perfectly calm. There are no waves to speak of (even after visiting the beach every morning). It could be a lake…

A brisk walk for a couple of kilometres eventually warms the hands and feet. The sand is 6°C and a chilly westerly wind competes with the heat of a low sun. It’s just perfect as you drain your mug of tea while splashing through the water’s edge. There is nobody around, just you and the gentle seawaters, blue skies and the shimmer of the sun on the water…

A couple more nights then

Yes, it has a certain charm here. But you have to look past some of the rundown buildings and the muddy pitches and it is probably a very different experience during the summer!

After a couple of chilly nights in the tall shade of a eucalyptus tree that is blocking out the heat of the sun, we decamp two spots to a space that is more exposed to the wind but has more sunshine during the day. This is a good trade-off!

The muddiness underfoot can be explained by a temperature drop to around six or seven at night. During the day we reach heady temperatures of 15 degrees, however, as soon as the sun dips below the horizon the mercury drops as rapidly with it.

We sleep in the Land Rover. Not too bad, especially compared to the damp interior of the tent due to the dewpoint.

What is noticeable here is the separation from the long-termers. They are situated at the rear of the site under their netting with the ‘one-nighters’ being sited toward the front in the direct sun. This may be a cause for complaint during the summer, but right now it is the best thing to observe just how much the sun can warm your day (in more ways than one)!

The other quirk that we have seen so far in Spain is the penchant for the locals to come over to camp for the weekend. This reminds us of South Africa when we used to do the same. The main difference here is the noise level.

Similar to our experience on camping Estrella de Mar they do enjoy their music and a good conversation (just what they are loudly discussing – I have no idea!). So from a tranquil mood during the week, we get some action on the weekend and a small look into the locals doing their thing. Very cool.

A bit of warmth

What a luxury that we finally get our ‘car parking heater’ fired up for the first time. This diesel heater is a game-changer if you are camping out of season, notably in winter.

As I said, once the sun is gone so is any heat, and if there is a breeze coming from somewhere near the Arctic, you don’t have much in the way of warming up in a tent. So I can happily report that we have never had it so good in our sleeping bag inside the car. Rosy cheeks and toes, what luxury!

We end up staying here for far longer than expected. A total of four months to be exact. This wasn’t the original intention but there are a number of factors at play – if you look past the muddy pitches – notably:

What can also not be understated is the jovial nature of the ‘grey’ roamers in their campervans. Many of whom are parked here for quite a number of months. We saw many French (Morocco was closed) and a fair few Dutch and a sprinkling of Belgians, Swedes, English and a stray Dane or two.

But by far the most were the Germans. And a jolly lot they are! With a handful of words in broken German and hands and feet, we made fast acquaintance with a number of ‘long termers’ (more than one week stay) and they never failed to greet the day with a joke and some light-hearted ‘ribbing’ at each other.

When we finally packed up the tent it almost felt as if we were leaving a home of sorts. This was by far the longest period of time we had ever spent on one campsite. Most of our enjoyment was the beach but aided by the good vibe in camp.

I would recommend it for a winter stay. If you are looking for some action then possibly not the first choice, neither for the open, gravelly, sometimes muddy pitches. But it is a very good deal on the money front and to have a ‘cold’ swim every morning is the ultimate luxury!