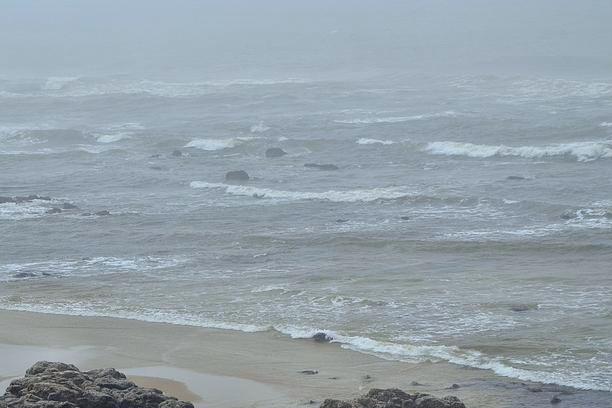 During our Master Diving training course, we were instructed to do a shore-entry navigation dive in our buddy pairs. This meant kitting up on the beach, easing into the waves, setting the appropriate navigation course, putting fins on, submerging beneath the waves and setting off in the right direction.

The intention was to swim out 30m, surface, wave to the instructor, take another bearing back, submerge and return. Being near-professionals, currents and swell needed to be taken into consideration. We had calculated how long it took us to swim 30m, so the time had been set.

It had been raining heavily and the local rivers were in flood. We hadn’t seen Umkomaas this rough before. The waves were large and angry. The viz was 30 cm!

As newlyweds, we were quite keen on the advice that buddy-pairs maintain physical contact during the dive and decided that one partner would hold the other’s arm.

We established a few basic signals and set off. Putting our fins on proved to be a lot more difficult than we anticipated, but after much sloshing about in the waves, we were ready to set off.

Our timing was crucial in order to maintain contact. As planned we went straight to the bottom and tried to stay there. Alarm set in when we couldn’t see our dive gauges let alone our hands in front of our faces.

Extreme physical proximity was needed in order to see the other’s face. Seeing my wide-eyed expression, Marcel very calmly signalled that we needed to go deeper. The waves were too rough for us just to hold onto each other’s arm so we clasped each other’s hand. We inched forward.

Time slowed down. I became very aware of my breathing, which had rapidly increased. I tried to calm myself down, “Phew, ok Vic, you can do this … we’ve been through more difficult things than this … come on”. The sand, salt, grit and water swirled in front of me.

We were being mercilessly tossed about with each breaking wave and all the training about keeping a constant level had flown out of the proverbial window. I was surprised that each wave brought not only a new surge of panic but an enormous crashing sound and darkness. I was terrified.

I tried to signal to Marcel that it was time-out and I wanted to abort the dive, yet somehow a little voice inside me was urging me to continue. So we carried on.

As we got deeper, the waves above us turned into swells. The dive became more bearable, but not any clearer. At our agreed time, we surfaced and waved to our instructor. And were surprised to see the rest of our classmates on the beach and thought it had been a practical joke.

We calculated the strong side-current, took a deep breath (of courage) and our bearing, submerged and set off. The journey back to the waves took much quicker but then it slowed right down. It took us forever to reach the shore.

A mile off course

We surfaced as soon as we felt that we were in good standing water and were horrified to see that we’d been swept a mile down the beach. Our instructor had estimated our whereabouts and was there to help drag us out of the water. Exhausted by the dive, we still needed to walk back fully kitted. Exhausting!

It turns out our classmates had abandoned their dives after losing contact with their buddy. But we had done it, mostly. Another lesson that inexperience and miscalculations are no match for Mother Nature.

The next day the sea was completely calm and viz was 3m.