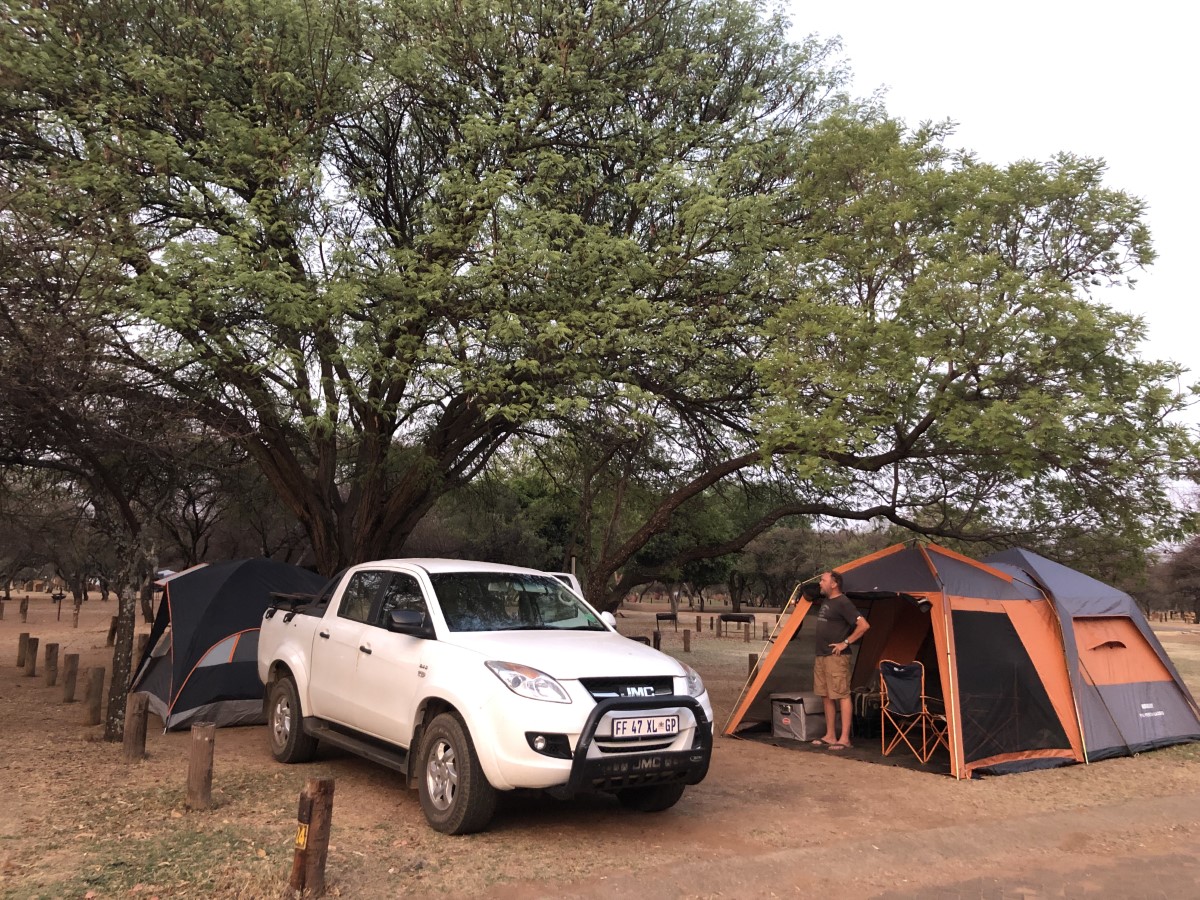 Not only is it situated one minute from the gate to enter the game reserve but tranquil surroundings and easy access to the resort amenities.

Like the all-important swimming pool to cool off in. Or the bar service and restaurant. You can even book safari tours in a game viewer if you don’t feel like doing the self-drive thing.

Each campsite pitch has a braai and is large enough for a trailer, tent, and vehicle. But tree shade is at a premium. So get here in the low season to grab a tree-covered site – or bring your own shade.

The ablution blocks are very rustic. Some areas were in need of maintenance and repair, like doors hanging off the wall, unserviceable lighting, and missing window panes. However, there was hot water on demand and (shock horror) even a stray roll of toilet paper (which is often not the case in Europe).

October is a good time to visit

There is plenty of space on the campsite and you can do some good game viewing. The national park itself is also not very busy at this time of the year, but let’s not forget it can also get quite hot around here! So don’t forget the giant fridge freezer full of beer!

Time for a game drive. And the entrance to the game park is only one minute away. We opt for a multi-day entry pass (which is cheaper than paying for a daily entry fee) and edge into the ‘wilderness’.

The beauty of Pilanesberg is its intimacy

It is nowhere near as big as Kruger Park. With a bit of planning, an early departure, and big commitment you could cover the whole place in one day. If you needed to. You may not be seeing much in the form of wildlife (which is why you came here, after all), nor will it be chilled and relaxing but it serves to illustrate that reaching the far corners of the park is well within reach. And exiting by the same gate of course, although this isn’t mandatory.

The other feature is the hillsides that offer differing vistas. Dirt roads meander over the crest and you are presented with a totally different view. You can get quite remote around here following these trails, so don’t forget your little Pilanesberg map.

The main roads all lead to the Pilanesberg Centre which is roughly in the middle of the game reserve. Here you will find a space to unwind from your tense encounter with a hotly bothered elephant. A restaurant offers culinary choices as well as a view from the deck. For those looking for a souvenir, that is catered for as well. A very pleasant place to spend a half hour. But time is of the essence since we’re burning daylight.

The nearby Mankwe dam is the largest body of water in the area. Therefore it attracts quite a number of animals – four- as well as tow-legged. The ones armed with super long zoom lenses and opinions to match.

Birdlife is varied and plentiful. The hide here is one of the best giving serene and hidden vantage points from which to spot a fish eagle atop a lonely dead tree branch or a terrifically fast kingfisher diving repeatedly into the water. Water that looks very inviting in this heat, but the unspoken deterrence in the form of a hippo’s call keeps us firmly seated in the hide.

On return to the campsite, a very welcome cooling off comes in the form of a cold beer served at the poolside. Now this is the life. Simple things that you normally don’t notice but come at exactly the right time. Like a bag of ice from the small shop on site that will serve to keep the drinks chilled. Or a bag of charcoal and the firelighters that we managed to leave behind in Johannesburg.

Sunsets happen deceptively fast in Africa. Within a quarter-hour, the lights are off and headlamps click on as you rummage through that ice for a cold can of Windhoek lager. If your tent isn’t up yet it can make for quite an amusing spectacle for your neighbours as you compare tent pole sizes and try to find the guy ropes.

However, the orange-red glow of the fire draws your interest more than the chirping of the crickets. Everything makes way for the presentation of a half-inch thick steak onto the braai grid. A sizzle indicates correct temperature guesswork masquerading as skill. Hazy smoke accompanies satisfied grins. The crickets redouble their efforts, now joined by the ever-invisible toad and the crack of another can of beer being opened. It is thirsty work!

The clouds of self-made smoke open up to reveal a black blanket across the heavens. More and more stars unmask their positions as you gaze up through the tree branches. Your mind wanders to existential things like how small the human race is amongst this grandeur and beauty. And where did I leave the braai tongs?

The only thing that can top an African night is an African morning. In contrast to the hasty retreat in the evening, the sun takes its time to greet the chilly morning. Bird calls replace the sound of crickets and they start early around here. Well before dawn and it is loud. There is apparently a lot to be told of the previous night. But everything else is silent except for excited chirping. It is pleasantly cool. Time to get the water on for a cup of tea.

And time to get back in the park. Breakfast will be served. but not here. We’re taking it all with us and we’ll be showing off our culinary skills to whichever wildlife is willing to look our way.

Our route to the planned picnic site is blocked. As are most people’s plans for today. A roadblock causes consternation to the dozen vehicles embarking on their own separate adventures. The main road heading to the dam is closed. And not by the local traffic enforcement but by the locals themselves. A herd of elephants has decided that the road is a far more enjoyable place to hang out than the bush itself. I suspect they are rather enjoying their early morning mischief.

We are diverted to another track winding over a hilltop. This route will turn breakfast into brunch at this rate, but it is a nice drive. We even spot a solitary crocodile sunning itself on a rock, completely unconcerned and presumably unaware of the elephant’s humorous antics.

At first glance, an incongruous place as picnic sites go. But then again, what exactly a picnic site is supposed to be like in the middle of a game reserve is cause for speculation. There is running water and toilet facilities but not much in the form of a view from which to pick off the approach of a hungry leopard.

Braai areas are dotted about the place, offering some spacial seclusion and the ubiquitous South African concrete picnic table/bench. We manage to find one with some form of view of the Mankwe dam far below and light our smoky wood and charcoal fire. The unseen hippos far below seem to find this amusing but there is nothing a beer can’t fix, even if it is hardly noon (it has to be beer o’clock somewhere).

Thankfully Vic has elected to take a cup of tea and take the wheel for the remainder of our drive.

Onions, bacon, and scrambled eggs accompanied by a slice of toast are eagerly, and hungrily, consumed and serve as prideful proof of our bush cooking abilities. Primitive and basic, with but a single frying pan and a fork to cook with there is not much that can beat it.

The sun beats down, the temperature is rising. Large open tracts of land laid bare in the blackened aftermath of brush fires. Dust seeps into the car as we rattle and bounce along the dirt roads. Eager eyes scan the horizon. Zebras amble along nonchalantly, giraffes stare down, hardly curious. Wildebeest lay under a thorn tree grabbing at twists of grass. A young springbok releases its energy in a sprint darting excitedly in an exuberant show of prowess meant to impress its mother who is looking the other way. An air of indifferent carefreeness is clearly apparent to us, the observers.

And then we find the reason. A pride of lions lies panting in the shade of an acacia tree. Hiding from the sun and trying hard to get some sleep, only stirring occasionally when another of those loud and smoky vehicles idles to a stop. The whirring of a Nikon, a delighted whisper. Fingers poke out of windows and point. But not too far out – you never know. The lioness drops her weary head again and one of them shuffles to find a better position on top/around the other members of the pride. The ever-present panting tongues indicate midday is here and the sun rules the plains.

Perhaps it is time to follow their example and retire to the pool. Game viewing success has dried up in the heat and we are merely using up diesel fuel and daylight at this rate. Let us beat a retreat and return nearer to dusk.

The charm and appeal of Pilanesberg

Difficult to describe in one word. It is pleasantly cozy in its small, accessible size. The hills, dams, vistas, hides, and layout of the roads offer much more of a landscape variety than Kruger. There is enough wildlife about, especially elephants. and the game reserve is only a couple of hours’ drive from Johannesburg.

It is all deceptively easy. Well-signposted roads make navigation straightforward, especially when armed with a map of the park. Distances are short and hides or picnic spots are plentiful enough. You can cover most of the roads in a long weekend if you wanted to see it all.

And there is a lot to see, the area around the Boekenhout dam seemed remote and very far from anywhere. And the picnic site was pleasingly deserted (except for a Parks pickup guarding the shade of a solitary tree). And plenty of water hides from where to do some bird-spotting.

Add in the campsite and amenities (although basic) and you have the perfect base camp from which to launch your very own epic safari. Just bring your braai tongs, beer cooler, binoculars and a sense of humour!