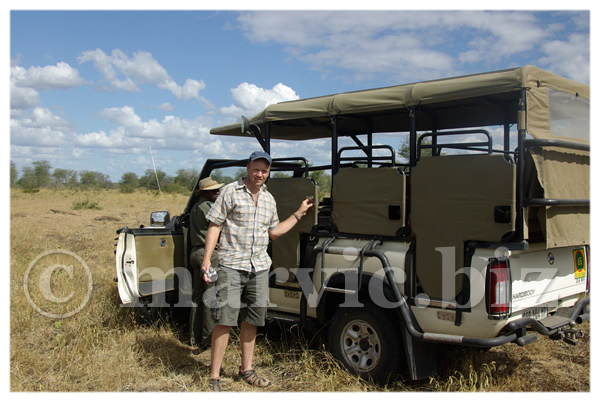 In the hot, baking sun we drudged ourselves, albeit rather willingly, behind two armed game rangers from Orpen Camp in the Kruger National Park. Our guides, Carol and Thomas, had fetched us in their open game-drive vehicle from the ablution facilities at Tamboti Tented Camp where we were staying. After introducing themselves and giving us a briefing of the walk, we headed out into the bumpy bushveld.

The best part about going on bush walks like this, is that you get to go into the “no-go areas” and are allowed to ignore the no-entry sign posts intended for the “normal visitors” in Kruger, as we had done earlier that morning. The drive was very pleasant, making general chit-chat over the weather, wildlife and South Africa. We came across a rather difficult patch in the road and Thomas hopped out the car to guide us through. Up until now, the ground had looked very dry, but this patch looked rather muddy. I asked if they’d had some rain lately, and Carol happily answered, “Yes, in January”. It was March. In the Netherlands, we’re happy if we get a week or two without rain …

We reached the spot where we could park the car, and while Marcel and I readied ourselves, camera and video camera, the guides readied their rifles. Just a quick reminder of the eminent dangers … lions, leopards, rhinos, elephants, … without there being any rivers in the immediate vicinity we were relatively safe from being attacked by hippos or crocodiles. As instructed, we headed out quietly in single file, whistling softly or slapping our thighs gently to let the guides know we wanted to take photos or ask a question. I have no idea how they saw it, but way in the distance they spotted a giraffe moving through the brush. My word! They must have seen it enroute to fetching us … at least that makes me feel better in my spotter’s inadequacy.

Along the way, Tomas and Carol told us about trees and bushes, and their medicinal uses for both animals and indigenous people. We encounterd orb spiders, a territorial wildebeest and a lone Kudu. We discovered traces of the Shangaan Tribe who were displaced with Kruger was proclaimed as a nature reserve. We even saw remnants of clay-pots from their ancestors scattered behind an old termite mound. It was nothing for them to travel tens of km’s to fetch water each day. Being used to cycling relatively long distances, the walk itself was fine, but the sun was relentless. Even though we carefully and consistently sipped our water, by the end of the day we were knackered and my head started to pound.

Tomas then decided to play a little trick on us. He encouraged us to try the leaves of a Spiky Thorn tree to make our mouths feel all silky and smooth. Naively we nibbled on the greenery, which turned more powdery with every bite. Then Thomas couldn’t contain himself and packed up laughing. Spiky Thorn leaves are renowned for making your mouth dry. It turns out that not even impalas eat these leaves, because they make you thirsty. Animals are smart enough not to eat food that makes them more vulnerable … like needing to go to a water hole. An amazing plant however, as the leaves are also used medicinally to stop diarrhoea! Trying to be good-humoured, I managed a weak smile. “We are not amused” I was thinking in my name-sake.

On the way back, we joked about the European Roller needing to pay conservation fees during their four-month sojourn at Kruger. And perhaps to compensate for the spiky leaf trick, they dropped us off outside our tent at Tamboti. It was a hot but interesting bush walk. It’s far more sensible to stick the morning walks during Summer and leave the afternoon walks during Winter.

However, if you also enjoy the luxury of being alone on a game drive, then keep a panado ready for the inevitable head-ache, wear a good hat, lots of sunscreen and take lots of water along.