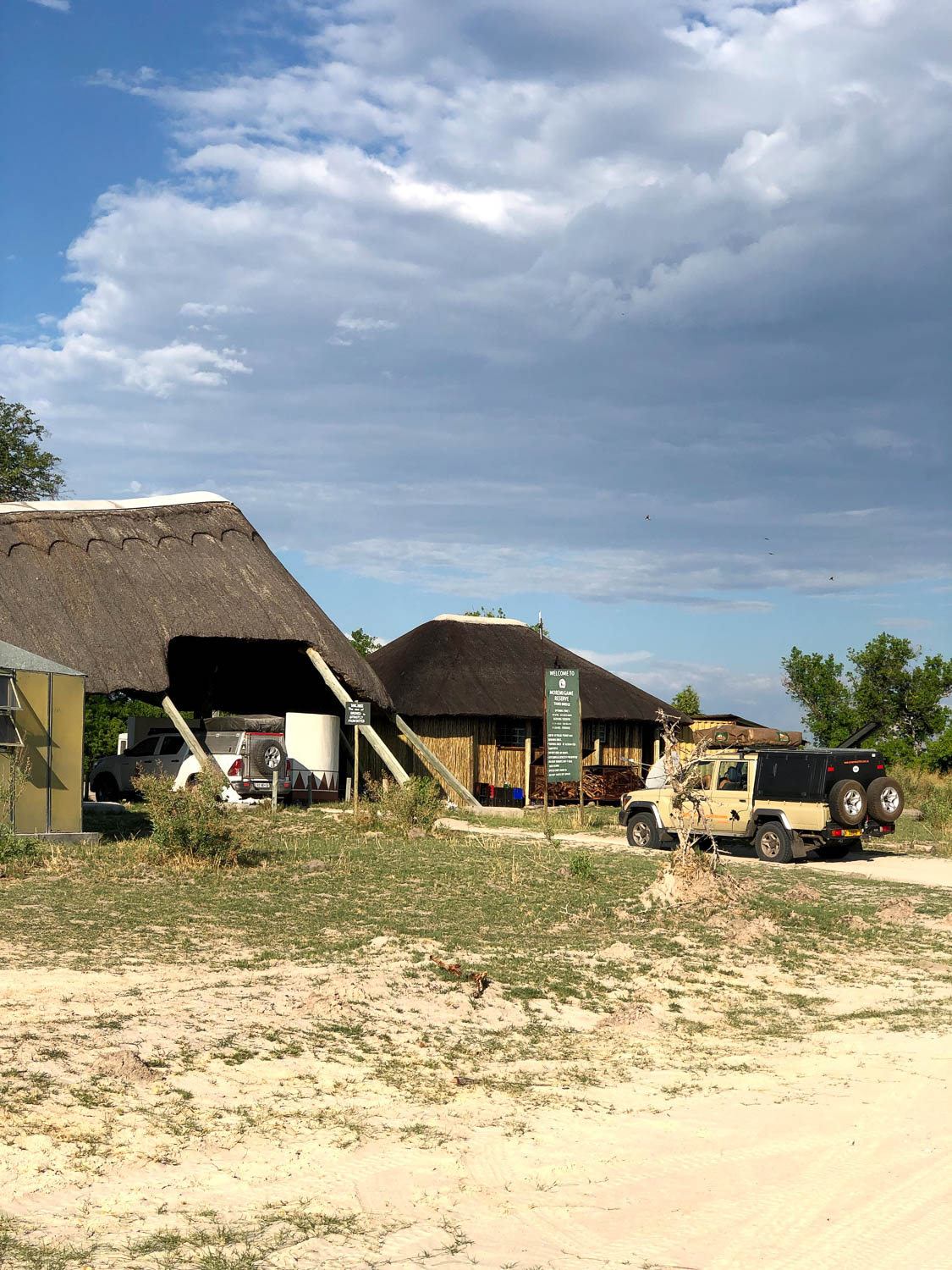 I planned this trip using Google maps (yeah I know…). I was trying to get an idea of the distances, accommodation and accessibility in order to plan the daily itinerary. I can tell you that it is difficult to get a good mental image of the area just from a map. This area looked like a large open expanse of unchartered territory so I set about looking for a campsite in the middle of it. ‘Third Bridge’ looked like a good option.

The planning, in general, turned out very well, but nowhere was the Okavango Delta mentioned. It is, therefore, a surprise that we find ourselves right in the middle of the Okavango/ Chobe region within spitting distance of Caprivi. It was not on my radar as such, merely throwing a proverbial dart into an open space in northern Botswana…

The drive to Third Bridge Camp was ‘interesting’. From Maun, we headed north following the main road (the only road) until the road forked in the direction of Chobe to the right and Moremi to our left. We had been advised to pay the ‘park fees’ in Maun – before heading out – at the Parks Office. This seems to be standard procedure for Moremi – and would come back and bite us, as we elected to ‘just go and we’ll see’…

The tarmac road heading north becomes a wide, level dirt road after about 40 km. The only inconvenience is the recurring ‘washboard’ surfaces which can be challenging if you don’t have the correct speed (faster can be more comfortable). After the road fork (and another foot-and-mouth checkpoint at which we were once again waved through) the dirt road became less well-graded and the vegetation more closely encroaching – trees, shrubs and dry grass.

Twenty kilometres from the gate to the game reserve and we spotted giraffe… And elephants! What ?! Yes, out here. We weren’t even in the park yet… I do realise we have all seen elephants in a national park before, but OUT of the park? Not me, sir…

The South Gate entry-point to Moremi Game Reserve loomed up ahead and we stopped at the office to register. And were met with disbelief by the park personnel manning the reception desk.

‘Why haven’t you paid the park fees in Maun ?!

‘Well… we couldn’t find the offices’, I replied.

It took twenty minutes to convince them not to turn us around and go back to Maun to make the payment. We had to pay double (yet again) for the exemption. Lesson learned! It cost us in the region of BWP 1850(!) to set the record straight, and have the ‘privilege’ of entering the park. Already a not insignificant expense in itself.

At this point, I think I need to mention that the region is definitely not, as a whole, on the lower end of the budgetary scale. Moremi Game Reserve may be less well-known than, for example, Chobe, however, it is still in the ‘Safari Zone’. If I have suggested in a previous post that prices were affordable with regards to fuel, food and beverage, then disregard that when entering the Okavango, Caprivi, Chobe sectors.

This is prime Safari territory in southern Africa and the prices reflect that. Although I am sure there are ways around this – which we will have to explore on a future visit.

We left the disgruntled receptionists behind us and entered into parts unknown. There is no paved road, just a sandy track and we followed our Garmin GPS, as there aren’t any road signs around here either. A couple of Land Cruisers with some tourists aboard passed us as we meandered through some thick bush lining the track. We spotted the first elephants (IN the park), giraffes, impala and a warthog that seemed undecided which direction to go in.

The roadsigns (that were actually still in place) had no recognisable writing left on them, being indecipherable whether to head left or right or straight ahead. And all the tracks were the same – nothing indicating a well-used option that may be preferably followed. And so… you guessed it. We got lost!

Our little Garmin had a five-inch screen that was lacking any form of detail, nor could it give us a ‘big picture’ (yes, blame the equipment would you please). The tracks we followed devolved into soft, beach-type sand. The Toyota laboured on, no other cars to be seen or heard from. Tracks split into two and then three options. The Garmin seemed as confused as we were…

Hippos regarded our rattling approach with suspicion. Birds shrieked animated warnings. Grazing waterbuck barely lifted their heads. An elephant was half-submerged in marshland. The route disappeared into deep, standing water causing us to turn around and backtrack another five kilometres. Everything looked the same – the sandy track, the trees, small bodies of water, the thick bush…

The day was getting away from us and although we had an indicated 20 km to go, it didn’t seem like we would get there before nightfall. Luckily an element of good fortune found us trying a new option down a seemingly disused track and we happened onto a broader piece of ‘road’.

Fresh tyre marks were embedded in the sand which gave us hope that we were heading in the right direction and we crossed dry, open, dusty areas with dead trees. Marabou storks stared blankly as we passed. Some were balanced on the dead branches, some on the ground nosing through the dust. ‘Does anyone know which way to go ?’… No response.

We eventually caught up with another vehicle, similar to ours, heading in the general direction of the Third Bridge camp. So we followed. The vegetation changed constantly between sections of tall Eucalyptus trees, dense scrub brush, open water, and dry, open areas. We followed the soft, sandy two-track for another hour, straining to see any game.

The Third Bridge Camp main gate appeared as a large, impressive-looking, thatched-roof structure. We checked-in (very efficiently) and were directed to campsite number 6. We later understood that there were only 10 pitches in total, with a number of safari-tents as well (which we didn’t see).

Our pitch was very, very big. With an area of about thirty by thirty metres square for us alone! Very tall Eucalyptus trees provided shade and thick bush separated the other pitches which were not visible to us.

The site had fine sand underfoot with a large, dead tree in the middle and a braai area provided (fired by (own-supplied) wood or charcoal). The ablution block was a short walk away which I found to be pleasant, in the African style providing everything you need, clean and neat.

The large size of the pitch took us a while to grasp, as was the lack of noise (as is prevalent in campsites in Europe). The sun was setting a deep red/orange through the large trees as we barbecued and enjoyed a sundowner. Apart from crickets chirping and birds calling in the distance we had the feeling of being totally alone in a wild African landscape far removed from society.

The African bushveld doesn’t come much better than this. The ‘luxury’ of a very, very big campsite and being right in the middle of the bushveld surrounded only by wildlife. The pitches are unfenced and open to the wildlife passing through the camp, which was not something we had experienced yet including from our many excursions to Kruger Park.

Our slumber that night in our roof tent was interrupted at two a.m. by a grunting hippo splashing about in the water nearby, as was the sounds of an elephant eating grass right next to our camp. In the morning we were baffled by the disappearance of one of my flip-flops (which we found later with toothmarks in it).

You may think that this shouldn’t be a significantly impressionable experience for someone who grew up in South Africa and has been to Kruger Park many times. However, this was something else. It was a first for having spent the night in an unfenced site, which gives an added sense of exhilaration. Also, the effort involved in getting to this camp is, in itself thankfully, not in the scope of most people. Its remote location, and elevated difficulty in getting there, automatically excludes most large tour groups.

Along with what is, arguably, a cost factor. Paying the equivalent of €100/night. For what is very much not a four-star hotel with all-inclusive service, but in fact, a very basic, self-service campsite may not align with most people’s expectations. Add to that the cost of a 4×4 rental needed to get you there in the first place and do the math(s). It may not seem very good value for what you are getting :

Lodging: your own tent

Getting there: it’s up to you

Mode of travel: your own vehicle, fuel and time

Meals : you’re on your own

However, consider where you are: the African bush at its most awesomely basic.

Yes, this one gets filed under: absolute adventure. Driving there, finding the camp, spending the night in an unfenced camp. And the realisation of being in the Okavango Delta! An unfiltered experience, of being on your own, in your own time and ungoverned by an itinerary. This is a magnificent, privileged experience which I challenge you to put a monetary value on. Tomorrow we head for another ‘bucket list’ destination: Chobe National Park