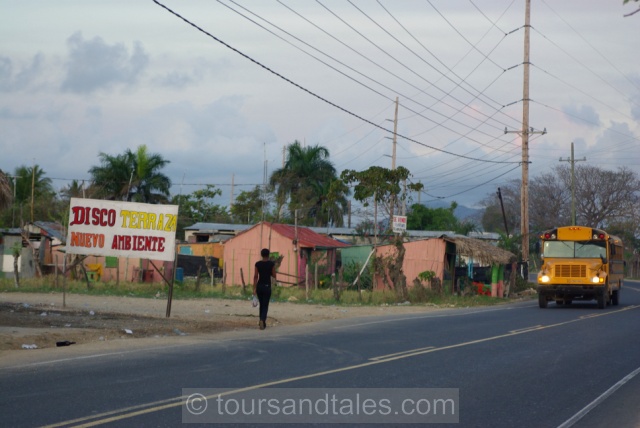 Good morning! Yes… once again we’re up before dawn during our holiday… “What is supposed to be a relaxing time to rest and recharge from a long year of hard ‘graft’, feels rather less-so at five a.m!” I think to myself, standing in the open-air foyer of the hotel … but it’s about 23 degrees – nice and cool – and the stars in the sky mean it’s going to be a sunny day.

The busses arrive and we manage to get the front seat of a twenty-seater and settle in for the three-and-a-half-hour journey to Samaná – where the humpback whales are. Maybe we’ll get lucky and manage to find them.

A rather large gamble to be driving half a day on a ‘maybe’… But what a great country! Rather larger than you would expect. Thick bush and forests. Palm trees, sugar cane, dirt roads… We pass little shacks built from board and tin.

Old buildings were probably built by the Spanish and have never been renovated. Litter all over the place. Potholes everywhere. Meat hanging by the roadside. Small farm shacks cobbled together from driftwood and selling fruit. People walking along the road in the middle of nowhere. Houses that are but empty shells. A general appearance of unkempt-ness (is that a real word?)…

It reminded me of Mocambique when we used to go diving in Ponta d’Ouro. The Portuguese colonials had invested a huge amount of time, energy and money to build roads and some rather large houses. When they left, and as a result of the civil war, it was just left to crumble. Nowadays the shells of the houses are still there – windowless, doorless, shutters hanging and the roof only partially covered. They are inhabited – by the locals – but maintenance seems to be put on hold, permanently.

Everyone is smiling and even waving though, as they lie under a tree or on the beach and let the day develop. Naturally, if I were looking for a reason, it might be a lack of funds to keep the infrastructure going. Although, what was noticeable were the bright colours. Yellows, greens, blue-painted walls… There always seems to be time and a couple of dollars for a tin of paint. No matter how dilapidated your house is, at least it looks good in the sunlight!

…is another word I would use to describe the Dominicans… And teeth – a lot of smiling. Maybe all that rum?… One senses that Africans and also the descendants in the Caribbean are unencumbered by the European instinct to keep everything ordered and tidy.

This I can only describe as admirable and enviable. Nothing wrong with that! I guess the weather also plays a huge role. Why rush around when it’s another beautiful day! As well as the countryside. To our eyes, it looks wild, but our reference point for the last ten years has been Holland.

Having to do without the luxury of space and a large population living in close proximity sort of forces you to be stricter about things. It’s clean, neat and tidy everywhere: roads, cycle paths, gardens, verges, parks, even the forest is tidy… In stark contrast with the Dominican – as seen from our little bus.

The pace is rather different to the mad rush in Europe as well. Nobody seems to be in a hurry. From the smoking scooters in town, ancient cars and pick-ups way past their useful life, old American school buses, to the donkey cart ambling along in the countryside.

The relaxed atmosphere sort of creeps up on you. We start to mellow and take it as it comes. The bus dodges a pothole and clambers up another hill. A boy on horseback trots past us as we stop to stretch our legs. And a lot of people just sitting around. But the palm trees, banana trees and Çana trees just kind of ‘make’ the backdrop a picture postcard. Lovely and green – a beautiful setting if you’re going to hang out under a tree…

Our destination for the day was the Samana Bay Whale Cruise. Well worth the early rise from the hotel! Check out the video below.