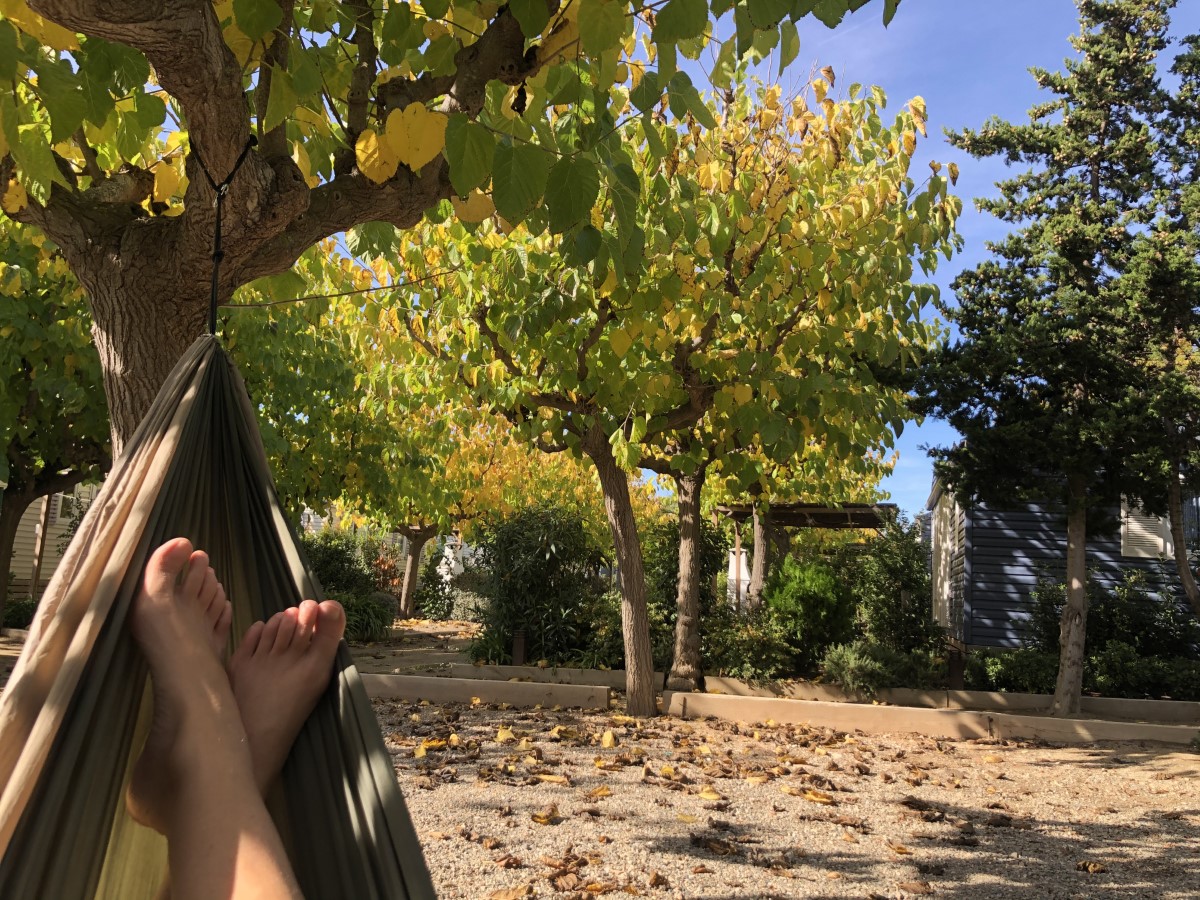 …as you drive in under the railway line it all seems to be well set up. Granted – it is low season, so we’ll see what it is like during the summer months! There are a large number of permanent sites. Caravans are set up with a side tent, matting, covered outdoor kitchen, and picket fencing. The works! They are, naturally, Spanish-owned and frequented on a seasonal basis, or so it seems.

A fortunate wrong turn from the campsite south of Barcelona brought us through a fantastic little road that cut through Parc del Garraf and deposited us slightly inland from Sitges. The rain failed to dampen the mood as we followed the winding route, having the road pretty much to ourselves. It was really nice to leave the crowded city and built-up areas behind. My favourite part of any journey is the solitude when you have the road to yourself. It really settles the mind and you can relax and take it easy. This is especially important in a Land Rover! The take-it-easy part…

All roads lead to Tarragona.

There really is only one road if you are trying to follow the coast so we wound up traversing the town/city. It is bigger than you might expect with shades of Nice and downtown Marseilles. Tarragona has a good vibe going (from what you can pick up from the seat of your car) and it seems that some history can be explored as well.

There’s an old colosseum, a harbour, a rather big city centre with plenty of action in the form of bars and restaurants and most importantly, palm trees! As we passed through the suburbs (on our winding way through the town) the housing looked like a photocopy of the Netherlands. Really rather weird…

The only negative would perhaps be the presence of a large petrochemical area just to the south. These things are supposed to be heard and not seen, right? This is true in pretty much every city anyway. And, let me remind you that we need to take the bad with the good. It serves as a nice reminder of our impact (sometimes unknowingly) on the planet.

Half an hour south of the city we find the campsite. And would you believe it – it is just north of Miami Beach! Yes, sir – look it up.

The check-in process is despatched fairly smoothly and we choose a pitch amongst the permanent residents. There are a limited number of sites for campers passing through. Most of the pitches are permanently reserved and occupied by a setup as described above. You are not going to get these guys to move any time soon, they are dug for the duration. I would hazard a guess that there are 40 open pitches and another dozen, or so, space for campervans along the seafront dune.

The pitch itself s not a bad deal really, but a little tight at about 8×8 metres, and this limits our options in setting camp. But we manage to fix up something serviceable and then put ALL of our kit out in the sun to dry off from the rainshower earlier that morning.

The ablutions are really very good. Smart and modern and ruthlessly attended to by a couple of cleaners. The best we’ve experienced by a country mile. This wouldn’t look out of place in a four-star hotel.

There is a restaurant and part-time shop – all the usual, although these are not open at this time of year. The shop opens doors on the weekends for obvious reasons when the locals descend on their beach residences.

The obvious draw is the beach. The campsite fronts onto the dune. I jealously eye out the large and shiny campervans parked here. If we had something more substantial than the old Oztent then these pitches would be the first choice.

This particular section of beach is practically deserted and stretches for miles either way. To the south lies the perhaps bizarrely named Miami Beach. A vague memory of crocodiles, Ferraris and rolled-up jacket sleeves enters my mind. Followed by Jan Hammer’s iconic drumbeat. But I digress…

The view is just phenomenal. The rising wind adds to the dramatic views of crashing waves and huge skies. The horizon is a deep red backdrop that you cannot hope to capture on film. And while you’re enjoying this you look around and realise that there are just a handful of fellow travellers scattered on the sand.

The beach is wide and deep and refreshingly devoid of any clutter like volleyball nets, beach loungers, umbrellas, jet skis or even a lifeguard’s chair. This is nice and simple as well as basic and close to nature. Give me this any day of the week over a packed stretch of sand with a thousand tourists struggling to find their towel after leaving to go and buy ice cream. And in no way do I mean that as disparaging, I am just looking for a different vibe at this time.

There is a moment, every single week, that you need to go out to hunt and gather… We all need to feed ourselves somehow. The modern way dictates that this does not come from your own self-sustaining garden nor a large mountain range in which to draw your bow.

It is rather more domestic in the form of a supermarket dispensing pre-packed goods at a price. The biggest challenge here is whether to choose the big, red tomatoes or the newly-in-vogue yellow ones that have a strange taste but are ‘of-the-moment’.

Thus I find myself at the local Lidl/Mercadona/Esclat to replenish our stocks and more importantly, to provide us sustenance! I have no photo record of this operation, as this is a fairly dreary necessity that we all need to deal with. What IS of interest is the town of Miami Platja being completely devoid of life.

This shouldn’t be surprising considering the time of year, but I expected a couple of locals at the very least. The shopfronts lining the main road are all closed. Realtors, hardware stores, cafés, nightclubs, restaurants. Even the tyre store is closed. Only a pharmacy and a convenience have their doors open. And fortunately, in this case, I suppose the supermarkets. But even here the customers struggle to outnumber the staff.

Perhaps this is a knock-on effect from tourist numbers being reduced due to the current situation and doubly so due to this time of year? Maybe it is the normal state of things every season? Do we need to revisit this area at another time?

The campsite is very good – if you give it some time, as with most. There is a group of older folks that find their joy in a petanque game every evening. This is a far more serious sport than you may think, although the clack of the balls is actually quite a nice sound, along with the bickering when trying to judge the exact distance to the ‘cochonnet’. Rather soothing to hear in the background.

A bit of wind!

The wind was the only real downer here, and that is all on Mother Nature. It came down from the frigid north and rose in intensity, most notably in the ferocity of the gusts. The poor Oztent shook like a kite in a force seven gale. And not just a shiver but a powerful shake to-and-fro that lasted a few seconds before calming down and then vigorously shaking the fabric once again. Even though we had picked a relatively sheltered site this was incessant and in fact quite worrying. Mostly for the health of the tent but also because of the racket that made sleep practically impossible.

We tried. We really did. But eventually, we were forced into the Land Rover after a couple of nights of battering wind. Purely for sanity’s sake. And this proved to be a pretty cosy haven (as I suspect are all campervans with solid walls) in which we actually managed to get some sleep during the unrelenting wind, imagine that!

I did enjoy this as a good piece of coastline. The stretch of beach right in front of the camping is as pristine as you could possibly expect. Especially considering the popularity of this coast. A pleasant absence of the’ seemingly endless stretches of apartment blocks that can be seen as you drive along the coast. Naturally, we were here in the off-season at the end of October so I can’t speak for the midsummer madness. But there is a good set-up here – good services, a fairly comfortable pitch and instant access to the beach. I would give it a thumbs up! More so because Vic LOVED it!