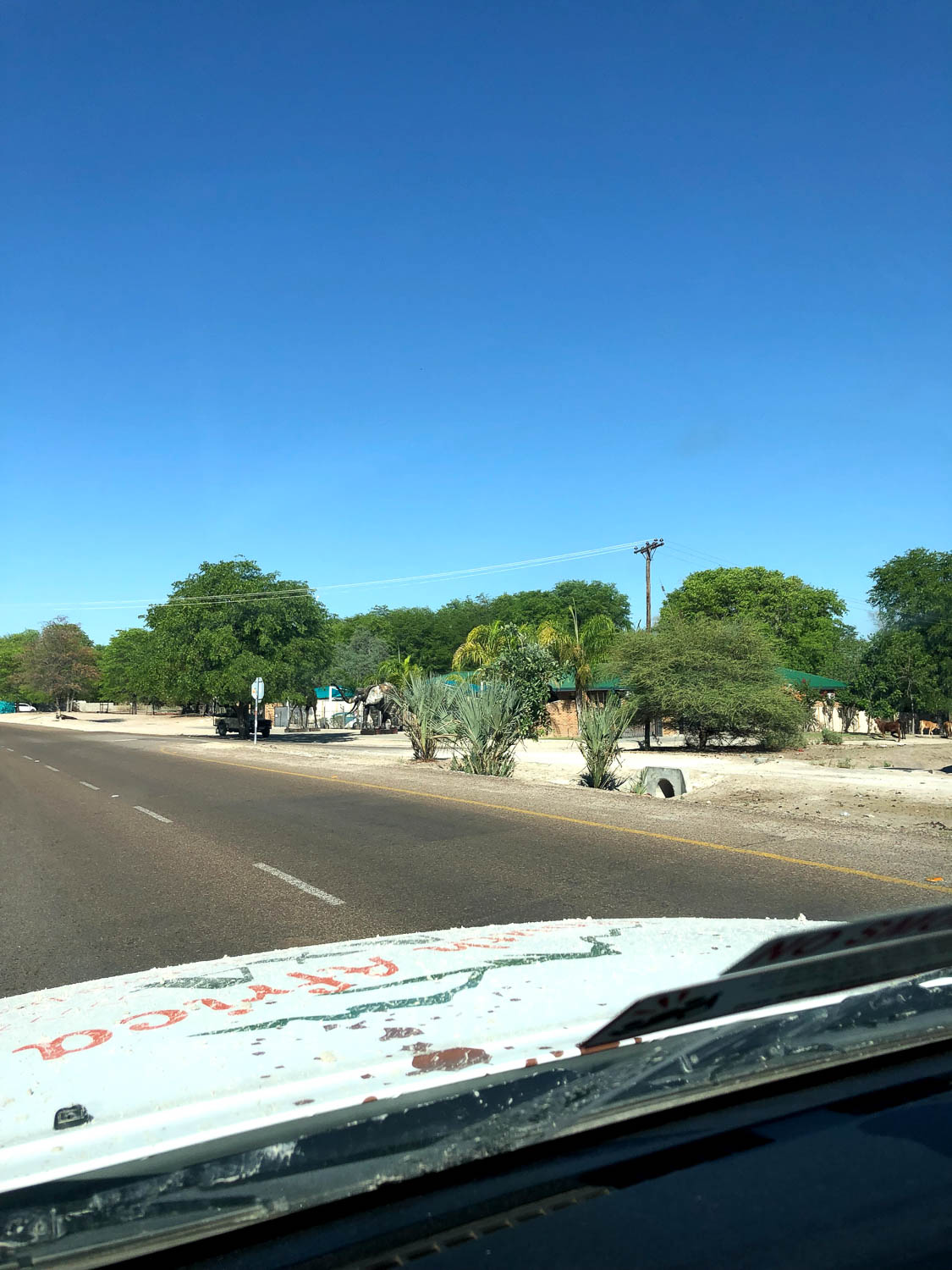 If you have read the previous blog about Makgadigadi Pans (an awesome experience!), you will remember that we had a ‘check engine’ warning light on the dashboard of the rental Toyota Hilux 4×4. This was slightly concerning for us on the Salt Pans as we were alone, isolated and at least twenty kilometres from the main road (and cellphone reception).

It took nearly two hours to cover those final 25 kilometres. Limping along at barely more than walking pace really, not sure whether the engine would stop at any moment. It was with some relief that we made it to the main road at Gweta and immediately stopped to phone SA 4×4 Rentals to discuss the issue.

There was another vehicle parked at this roadside layby, whom we approached and asked for advice. It turned out he was a mechanic with an engineering shop in Maun. And they were in Gweta looking at possibly buying an old car from a local. They came and had a look under the bonnet, but everything seemed fine and the engine ran normally. He shrugged and said there wasn’t much to be done anyway. So, armed with approval from SA 4×4 and the second opinion, we set off for Maun coasting along at a sedate 80 km/h.

We were soon passed by the mechanic in his Land Cruiser J80 series who zoomed off towards Maun. The road was very quiet with not much traffic and the sun was beating down rather fiercely. With windows open, a swirl of warm air didn’t do much to cool us, but it was pleasant enough.

After an hour of appreciating the countryside and at roughly 150 km from Maun we saw a vehicle off the road against the game fence. The roads in Botswana are on a raised ‘berm’ roughly two metres higher than the surrounding landscape – which is as flat as anything you will ever see. On either side of the road, there is a wide section (perhaps 50 metres wide) of cleared land. The vehicle was down the side of the road against the fence, bonnet up and one of them lying under the vehicle.

Drawing closer it appeared that it was the very same mechanic and his (not-so) trusty Land Cruiser! He was standing near the car waving us down – so we slowed down and dropped off the road towards them. It turned out they had lost all transmission fluid for the automatic gearbox. In the searing heat he asked if we could tow him to Maun…

We both shrugged and said sure. We couldn’t just leave someone stranded so far from the closest town and besides, we weren’t in a hurry anyway, limping along as we were… He produced a tow bar (a solid steel round bar) and attached his Land Cruiser to our Hilux. I remember thinking it fortuitous having equipment like that onboard – but it was probably for the car they went to see with an eye to purchase (but declined doing so).

Now dragging an anchor of upwards of two tons it took some difficulty to get back onto the tarmac but were soon rolling along. Thank goodness the country is flat! Looking in the rearview mirror brought a very close view of the Land Cruiser windscreen – the bar was only about two metres long. I don’t think I have been tailgated this closely before… He, therefore, motioned me not to exceed 60 km/h for the safety of all concerned. Dodging a couple of potholes and a dead cow in the middle of the road (oh yes!), we made unhurried progress marvelling at this new adventure we were a part of…

Two hours of concentrated driving later, roasting in the heat, with as much looking rearward as forwards, brought us to another foot-and-mouth roadblock about 50 kilometres from Maun. As we pulled through in order to accelerate, he waved frantically from behind us and motioned to pull over.

A Land Cruiser pickup was parked there. It was his wife – who had driven out from Maun to meet us. She would take over towing duties from here.

He was extremely grateful to us for having bailed him out, as we had saved him about four hours of his time. We had lost some of our day but were an experience richer. I expected to shake hands to be on our way while they transferred the towing bar to the other vehicle. However, he insisted that we come to his engineering shop in Maun where he would fill up our fuel tank, which I found a very generous offer, but mentally filed it away as something that we couldn’t possibly accept.

On reaching Maun we were instructed by SA4x4 Rentals to go to the Midas automotive shop where we found ‘Mike’ (I can’t remember his real name) who would facilitate a repair. He made a few phone calls and told us to head for a garage in a remote industrial estate on the edge of town.

Luckily this was a project for the following day, as the sun was far beyond the yardarm so we set off towards our campsite for the evening (Okavango River Lodge), happy to have made it this far.

We spent a lovely evening on the campsite (once again all alone – which you can read about in the next blog) and the next morning backtracked to Maun to go and see about the check-engine light. By now we had faith that the vehicle would keep running.

Carwash and an easy fix

We spied a ‘carwash’ (basically a guy with a high-pressure washer) and decided to remove some of the mud in the belief that this may help the mechanic later. Half an hour later, after having been thoroughly fleeced for double the normal price (what did we know?) we found the garage and the man dived underneath.

He resurfaced with the easiest fix – a dislodged speedometer cable hanging from the gearbox. A twenty-minute result – but also a deeper dive into our finances than planned. It pays (pun intended) to know the value of things…

What we did not expect (having forgotten about his offer) was the mechanic’s engineering workshop next door!

So what would you do?

We went in and had a chat with the guy, to see if all had turned out alright. He had managed to fix his car and was still grateful – to the end that (despite our protestations) he insisted one of his employees accompany us to the nearest fuel station and fill up our car at his expense.

It was very nice to see people making – and keeping – their offer of doing something.

We had not expected, nor asked for, anything in return. But we were surprised and heartened that someone would go out of their way to show their gratitude.

Now armed with a greater appreciation of humankind, and Botswana in general, it was time to set out for Moremi Game Reserve and Chobe National Park!