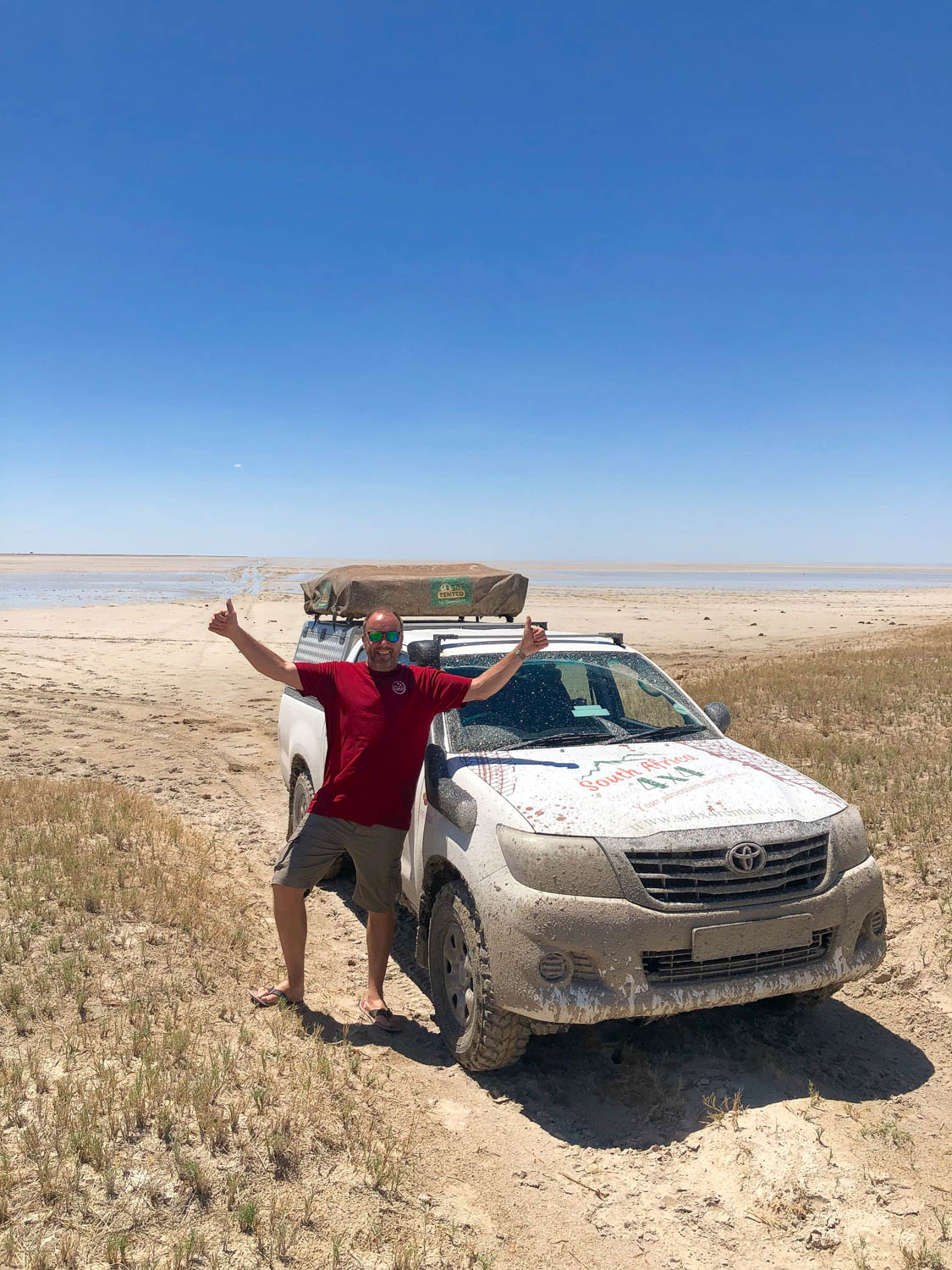 Itinerary at the end of the article. Full video of the trip: https://youtu.be/T8BDyPolg30

Botswana is a part of Africa that may not be as well-known as others but offers such an incredibly wide variety. From wild roaming elephants to remote – and seemingly impossibly inaccessible – places like the Makgadigadi Salt Pans and everything in between.

From the Moremi Game Reserve bordering on the Okavango Delta to the Chobe National Park (which is, to me, a mystically, unreachable destination as seen only on TV. The grand Chobe river which borders Namibia, Zambia and Zimbabwe. How about sleeping among the elephants in your tent!

How long should I plan for?

A week is not really enough time. I would aim to do at least 2 or 3 weeks. This way you get to enjoy way more scenery, slow down the pace and you spend more than one night at a campsite. Our tight schedule prevented us from visiting Vic Falls as an example – which is for the next trip…

I planned this trip on Google maps. Loosely based on a two-week itinerary which I got from SA4x4 Rentals. I had no reference nor detail as to specifically where we were going except for a very tight time-limit of one week! It turned out to be one big surprise after another – and all the better for it.

Botswana is one of the safest countries in Africa. There is easy border access, all the amenities you could need or want (supermarkets, ATM’s, campsites, hotels), and it is not too expensive. And the people are really friendly! It offers such a wealth of natural beauty with wide-open expanses, diversity of wildlife and is sparsely populated.

Oh yes! The national parks have a primitive infrastructure and road access is by dirt road only. The benefit is that this limits the number of visitors and keeps the impact of tourism to reasonable levels. The Makgadigadi salt pans in particular are very remote and offer mile after mile of muddy (non-existent) tracks. Moremi and Chobe roads are nothing more than tracks of soft, beachy sand. It is very slow going with permanent 4×4 engaged. You need a reasonably capable pickup to get into these areas at all.

On the main, regional roads the infrastructure is good. Roads are in good condition, and (at least during our time there) not busy at all with the exception of Francistown – which is much bigger than just a ‘town’. We visited at the end of November/ beginning of December, just before the rainy season and getting towards mid-summer.

It was extremely hot, and in some places very dry! But being just after the high season there were not too many tourists at all. We spent most nights as the only people on the camping! What a privilege!

Distances are not extremely far, yet take far longer than you think. Taking, as an example, from the border post at Groblersbrug to Makgadigadi Adventure Camp. This is roughly 450-500 km. This should take roughly six to seven hours considering good roads and an average speed of 90km/h, including a stop for fuel.

What this does not factor in is the expected delay at the border post (which was faster than expected at around half an hour).

More importantly, the last 60 km is along rough tracks and the salt pans themselves. As an indication – we left Big Fig Inn campsite (at the border) at around 9 am and reached the Makgadigadi Adventure Camp at 18.00 that evening. Those last 60 km took us nearly three hours… So be prepared for delays and some tough, slow driving. You may be behind the wheel all day long – and will definitely have earned yourself that beer!

ON the main tarred roads mobile phone coverage is good and 4G speeds on a par with Europe. Count on having ZERO phone reception within the national parks – but that’s why you’re here…)😀

The tarmac roads are generally well surfaced with not much in the way of traffic. You will come across similar vehicles doing the same thing you are, as well as some old and battered trucks and some locals driving fairly young and neat hatchbacks. They seem to be quite well behaved behind the wheel, but this may have something to do with the sparsity of general traffic.

There is a wide area on either side of the road that has been cleared of vegetation (except for some sporadic trees). I am not sure as to the reason for this. But there are cattle and goats grazing freely, along with donkeys tethered to a tree, seemingly very far from their owners. Be prepared for stray elephants feeding near the road as well – oh yes!

Speed limits are quite low at 100km/h (120km/h on dual carriage highways) and there are quite a few checkpoints along the route (for foot and mouth disease). We also encountered a speed trap later on in the week – but that is for another blog.

I had done some research which led me to believe that bringing across your own red meat is prohibited – so crossed the border with an empty cooler-box. Disappointingly (I guess) our vehicle was not checked at all. We received our passport stamps and were waved through within 40 minutes.

In the bigger towns, there are good amenities with plenty of shops, supermarkets and fuel stations. As mentioned the local currency is quite strong and diesel is not as expensive as in South Africa. This is a big part of your total budget of course, as you will be doing a lot of mileage…

The supermarkets are just as you would expect in any other country: fresh produce, meat, dairy, bakery and all the well-known brands. And it doesn’t break the bank! All cards are accepted and we drew some cash at the ATM as a back-up for the smaller roadside stalls, if needed. Some campsites will have a basic shop selling tinned food, beverages and charcoal – the cost of it at an expected premium…

Most larger towns – like the Maun safari hub – have everything you will ever need, including vehicle repair services.

We rented our Toyota Hilux double-cab 4×4 from SA 4×4 Rentals (catchy name) who are situated in Johannesburg, South Africa. They are able to help with an itinerary and bookings for your trip as well (but do charge for this service). On collection, you should count on about an hour and a half for pickup, paperwork and demonstration.

We had an older model with roughly 200 000kms and a wheezy, underpowered diesel engine that was fine on the level roads, but show it a hill and it started protesting. The rear leaf springs and shocks were also on their way out (as we found while crossing through Moremi Game Reserve and Chobe National Park). No matter – it got us there and back in relative comfort. Included was a Garmin (with a small screen) with Tracks4Africa installed. We leaned on this bit of kit quite lot…

We had a two-man roof tent, but a double-cab can be fitted with two tents if you are (up to) four travelling together. There is also plenty of space in the ‘bin’ at the back for all luggage for four, if needed. The two of us had space to spare and the extra cab space helped with all our photo/video gear. There are sleeping bags supplied as well as blankets and towels.

There is a large fridge that will allow you to take up to three or four days’ supplies – which is handy when covering long distances in the bush. A water reservoir is onboard (40 litres – mainly for washing up, not drinking) and there are two fuel tanks (140 litres total) so the range can be up to 1000 km depending on driving conditions.

We stocked up on large bottles of water and had no problem with buying fresh produce along the way. All cooking utensils, cutlery etc are supplied along with a 3 litre gas bottle for the cooker – which was way more than enough…

All-in-all it is a well-kitted, easy to use and a good way to travel. Most companies offer a similar product (vehicle, comfort and equipment) for a broadly similar price. The differentiating factor is customer friendliness, service and included options like border-crossing vehicle papers, insurance excesses and unlimited mileage. And don’t come to me with any small-print, please…

Clothing – it obviously depends on the season which will dictate your clothing choice. I would be confident that during the summer season you won’t need much beyond T-shirts (it can get very hot). In winter the nights can be cold, which will need extra layers. The rain season is normally between November and April.

Bedding – Practically everything is provided in the vehicle hire including bedding (sleeping bags, pillows and a spare blanket. Also, towels are included as well.

Fridge – a large fridge of at least 45 litres provides enough space for at least 3 days provisions.

GPS/Maps – GPS is mostly included in the rental. This has Tracks4Africa installed which is very detailed and should see you getting to the most remote places. Extra maps can be supplied on request. Try and take a guide for the National Parks.

Situated in a generally unremarkable area, you find yourself at the gate to the campsite before you know it. A four-foot high cattle fence surrounds an area of perhaps one hundred by one hundred metres. It looks very dusty and basic at first sight but there is more than meets the eye. There is a bar area that doubles as reception and a pool (both of which were out of action on our visit). There are five or six safari tents and a number of ‘pitches’ (empty, open ground) where you can park your 4×4 and camp for the night. After the adventure to get here all of it looks fantastic!

The ablution block is quite big with a couple of showers and toilets in both male and female sides. And two washing up sinks on the outside. The water is salty and heated by a couple of solar panels. Generally clean, neat and in good condition. There was no electricity – so no lighting at night. This was not a problem as much as a blessing with the fabulous starlit sky!

There is no grass anywhere and shade may be at a premium, but the grounds were clear of litter. But you don’t come here for the view! All things naturally being subjective – we were pleasantly surprised, not by the location as much as the remote setting and the stillness. The staff were friendly and attentive – even offering us the use of one of their torches when they saw we had no lights on at 11 pm (we explained that we were stargazing…). Overall pretty good value considering the location.

Sense of adventure – don’t forget to pack the camera and have some fun!!!

It is a fantastic place to visit. Wildlife, remote emptiness, challenging offroad driving and the overall sense of Africa at its best. Not too developed, a relatively small population and a large part of the country going towards wildlife and nature conservation. Unfenced camps in the national parks add to the drama and excitement.

I would say…. get here if you can! Africa has something about it. An energy. Something that captures the soul…